welcome to the January 2022 edition of #fridaygeotrivia!

As is our tradition, on the final Friday of month we run a social media geotrivia contest. We will again be playing on Mastodon, just as we did in December 2022.

As always, after the game is over we post the answers and winners here on the blog.

For more background on #fridaygeotrivia you may enjoy this interview with our friends at Geoawesomeness about the game (bearing in mind of course that the article references the old twitter way of playing).

Anyone can join in, you just need a Mastodon account.

Some people have complained that the format is a bit chaotic and hard to follow. Yes. The mad chaos is part of the fun. Embrace it. The goal is just to have fun and learn. We win by playing

#fridaygeotrivia is a game with two prizes:

This month we return to the idea of country chains (a topic we last visited in May 2022). This time we contemplate the topic of population.

What is the longest chain of countries such that each country in the chain shares a land border with the next and has a higher population than the next? 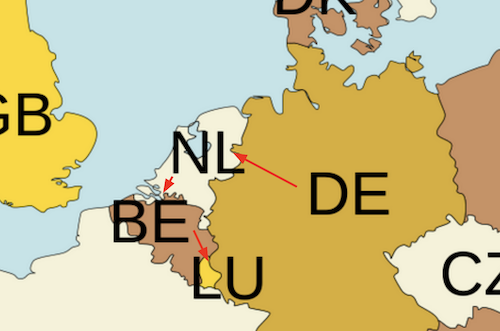 Who can find a longer chain? You may find the Wikipedia list of country populations helpful.

Remember: to get the points you need the #fridaygeotrivia hashtag AND the emoji flag(s) of the country. And only one answer per response.

This month we have a tie between Ciarán Ferrie and the mastodon user known simply as rubpec (who also tied for the win last month!), who each found two chains of 10.

Four chains of 10 were discovered: yes, of course we know XK is not an official ISO 3166-1 alpha-2 code, but it is widely recognized