Today I am very pleased to chat with David Overton of SplashMaps. For those that don’t know SplashMaps are custom fabric maps designed to be used in outdoor environments (or as a souvenir after a tough outdoor journey). This week SplashMaps launches outside of the UK by using OpenStreetMap data for their international roll out. Anyone can create a custom map here. 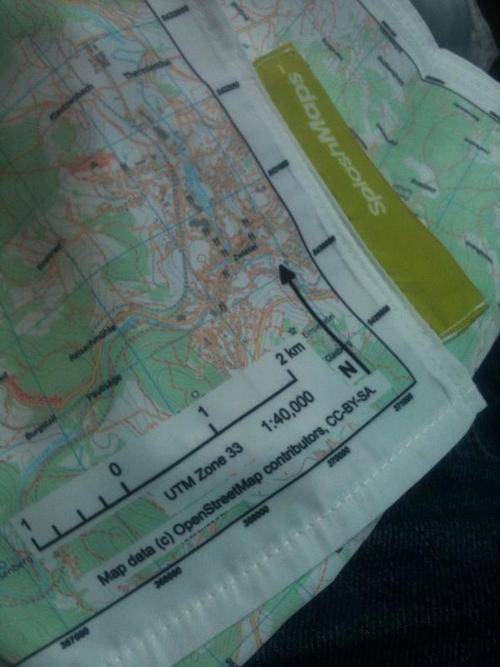 I’m David Overton managing director and founder of SplashMaps. I was the Innovation Manager at Ordnance Survey and worked for the agency for 8 years. I’ve also spent nearly 3 years managing projects for Eurogeographics. All these projects involved integrating geographic data from a number of different sources and from a myriad of countries. The aim was to create a European Location Framework of data and related services that enables interoperation from official sources. Through my consultancy, dbyhundred Ltd., I conduct contract market research, project management and work as an expert with the European Commission. I’m not schooled in Geography nor GIS, but I’ve degrees in Engineering and Marketing which comes in handy when making solid state products for the retail market.

2. What is SplashMaps? What’s the idea behind the product?

SplashMaps are washable, wearable fabric maps designed for use in the real outdoors - whatever the weather. The idea? Well, I love bikes and the outdoors and believe that the real route to adventure comes from having easy to use maps. But maps aren’t easy! And they are never on hand when you need them. We get too protective over our paper relics (keeping them safe inside plastic wallets in case… god forbid!… it might rain!) or instead we end up blindly following GPS which is really as pleasurable as looking at a map through a key hole. We also try and squeeze too much onto maps, believing that “if it’s static it needs to be on there”. So our SplashMaps proposition of a REAL outdoor spec’d map printed onto a weatherproof fabric works for the guy who just wants to know where that trail leads right up to the extreme outdoors enthusiasts who’ll run & ride with the maps wrapping them round their necks and heads as they take on the challenges of the outdoors.

3. In Great Britain, SplashMaps have been made my mixing Open Data from the Ordnance Survey (the national mapping agency) and OpenStreetMap, internationally the maps are made purely with OSM. What is your experience working with OSM data?

We started with OSM at SplashMaps because the Ordnance Survey didn’t have a license for allowing print onto fabric. We moved to OS’s open data which gave us the freedom to define a spec for REAL outdoor use, but the OS data left out a number of essential features. We discovered that OSM filled in the gaps very nicely. So we use the OSM for pubs, car parks, campsites, paths and tracks and for the last 2 years it has been our default source for these and will be as we go international. Uniquely in this country we have a number of designations for the Rights of Way and sometimes these can be slightly misleading on OSM. To counter this we both correct the data (and encourage our customers to) as we find discrepancies and we overlay bridle paths and byways from local authority sources on the maps to give a clear indication of where you can ride.

4. You’ve been working with long time OSM contributor Andy Allen of Thunderforest behind the scenes. What have been the technical challenges of going global?

When creating our Great Britain map series we were able to select areas of high demand (like the National Parks). This gave us plenty of experience in understanding the challenges of a volunteered data source like OSM and we’ve found the best way to depict and categorise their maps to cut out confusion. Key to our brand is having a look and feel to the (now award winning!) cartography. We’d worked long and hard to get this just right for the UK market and we wanted to make this available in the rest of the world. Our first challenge was simply using someone else’s map engine! We’d specifically adapted our own map engine to provide clear print files to print onto fabric. But Andy’s system is more geared to output on the screen. Adopting our style into Andy’s service is a case of trial and error. But we’ve now come up with a style for international that’s clearly recognisable as a SplashMap and ready for launch. We’ve also adopted a few of Andy’s techniques too to make our best looking maps yet. Hill shading is a new addition for international as are public lavatories and view points. Another key challenge is how to adapt the web interface to allow roll-out of the new international areas and how we market within those countries. To help with our strategy for entering these new markets we’ve become members of the UK Trade and Investment’s passport to export scheme. Already that’s helped us identify new suppliers and has helped funding the initial developments on the map engine.

#geomob is packed-out every time, regardless of the venue and that’s a measure of how exciting and fast moving developments in geo are. There’s barely any repetition and the new businesses keep coming! Of course we’re very proud to give away one of our maps to the best speaker at each event. Yes there are more solid state products coming onto the market that were born in data. I think this is an inevitable trend as people increasingly look for personalisation and interfaces that are novel. Don’t we have enough of back-lit screens in our work lives?

Here’s a picture of David (left) awarding the best speaker award to Robin Hawkes (an OpenCage interviewee himself) at the most recent #geomob. 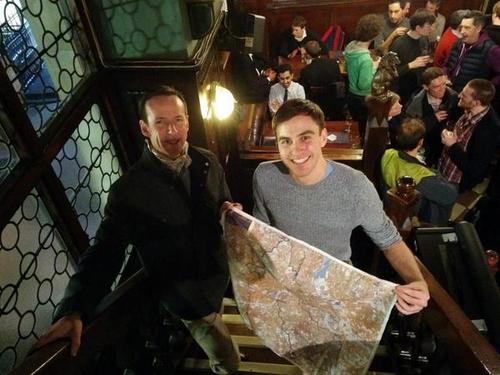 6. What could the worldwide OpenStreetMap community do to best support entrepreneurs looking to build businesses using OSM?

OSM is uniquely positioned now as the global map of choice for many businesses. As it grows, the potential for new business grows as well. Business and OSM can expand at the same rate. Embracing the mutual benefits of this (businesses contributing to updating the content and supporting the services of OSM) is a fabulous symbiosis. A business like SplashMaps gets feedback from our customers on a regular basis which often prompts us to update sections of maps. In this way the Great Britain’s National Parks are tidying up. Emulating this on a global scale is a daunting task for a small business. We are about to take the plunge and allow people to choose where in the world their SplashMap is made. Clearly there are risks. In these cases it would be great if OSM volunteers could focus attention on the high volume and demand areas in the world. For us that’s where the larger cycling, walking and running events are held.

7. OSM recently celebrated it’s 10th birthday, where do you think the project will be in 10 years time? Where will SplashMaps be in 10 years?

SplashMaps has just made its first map of the stars visible from the Northern Hemisphere. We’ve never made a map with such wide appeal before (a map that is relevant to half the world!). Digital enablement of our solid state mapping platforms is going to happen and flexible display solutions is probably going to play a big part in SplashMaps’ evolution over 10 years. Whichever of these technologies take-off SplashMaps will stick to its design principles and make the most usable flexible and rugged maps for the outdoor adventurers. OSM will continue to grow and with increasing commercial reliance upon its data it’s likely that the rewards for volunteering will increase and the data will become more accurate. The data too will become richer as more data providers move more of their data into “open data” and it gets ingested. This will make OSM a vital source of Hyper Local information for a whole range of location based businesses.

Congratulations to David and the SplashMaps team for the global launch! It’s great to see OpenStreetMap make it possible for a business to go global.