Today we interview the maker of one of the most visually compelling uses of OpenStreetMap data that we’ve come across: Robin Hawkes, the maker of ViziCities, a 3d visualisation platform. For those who haven’t yet seen it, you can play with a ViziCities demo here, or check out some videos. Here’s a screenshot: 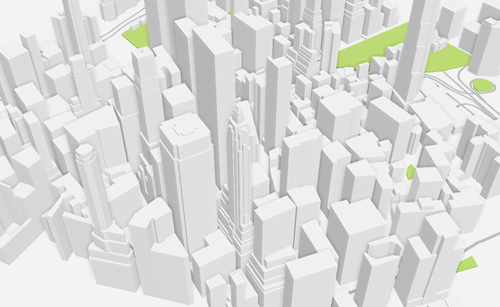 My name is Robin Hawkes, I’m the founder and developer behind the ViziCites 3D city visualisation platform. My background in geo isn’t as exciting or long-lasting as you may think, it actually stems from the creation of ViziCities a year and a half ago. Though I’ve always been interested in maps and geography (cities especially), it’s only been as a result of ViziCities that my passive interest has turned into an active obsession that grows each and every day. I can’t get enough of it now!

2. What’s the idea behind ViziCities?

The idea behind ViziCities is simple; use innovative data visualisation and beautiful design to solve problems and communicate stories surrounding cities and the citizens within them. What we’re working on right now is an open-source 3D visualisation component that takes data from a variety of sources, such as OpenStreetMap, and moulds them into a beautiful experience within the browser. The idea in this case is to show cities in new and exciting ways, ways that people aren’t used to experiencing their cities outside of the real world. This is why 3D is our focus right now; it’s a fantastic way to better recognise the area you live in when seen as a map (something 2D doesn’t quite achieve). 3D also allows you to do things you can’t do in 2D, like seeing data about urban infrastructure such as the London Underground or air traffic with much better spatial context and awareness (imagine squishing that all into the same 2D map tile). However, our cardinal rule is that 3D should never be used as a gimmick, it should only be used to provide a better or more understandable experience than what already exists.

3. You’ve succeeded not just in making something beautiful, but also in creating a vibrant community around the project. Many people are contributing feedback and code. What’s your advice for others trying to create open geo software?

Fostering a community around the project is something that has been on my mind since starting the project. My background is in developer relations for Mozilla and Pusher so it’s partly just the way I approach things, however I always knew that for ViziCities to be successful it needed external support and excitement. We’re definitely on our way to achieving that.

Here are a few things that worked for ViziCities that I’d recommend trying for your own open geo project:

- Be open and public about the progress of the project (with ViziCities we posted in-depth development diaries and regular tweets)
- Talk to people regularly and reply personally (it means a lot and results in things you wouldn’t expect)
- Generally, engage with people when you communicate, don’t just broadcast without emotion or purpose (I always imagine writing things as if I’m casually talking about it with a friend)
- People don’t arrive at your door willing to help. Ask for specific help.
- Give something back (with ViziCities I highlight community contributions and conversation)
- Make things as easy as possible (readme / documentation, guidelines, it all helps)
- Give interesting talks about your project at public events (keyword: interesting)
- Be honest, not everything goes to plan (stuff happens, promises slip – be honest and explain things)

4. Your day job is working for pusher, a service that builds tools for developers. What could OpenStreetMap community be doing to make it easier for new developers to start contributing?

I have to admit that OSM isn’t the easiest thing to get involved with, even for someone like myself who’s comfortable with new technology and approaches. Saying that, it does a lot of things well like documentation and tooling. You can’t beat the OSM community either, I’ve not met a more engaged and passionate bunch of people since my time interacting with the Mozilla community.

Much has improved recently with the introduction of the iD editor for OSM and involvement with companies such as Mapbox. That plus the wiki is basically everything you need outside of the in-depth API stuff. I suppose one thing that could be improved is a more obvious and deliberate way for new developers to introduce themselves (I annoyed a few in the community with this as I didn’t know where or how to do it).

Another thing would be to better document the correct approaches and guidelines for contribution to OSM. Something I still struggle with is knowing what the right way to do something is, if there is a right way at all. After talking to some within the OSM community it seems like “the right way” is something of a thorny subject that depends entirely on who you talk to. If this can be solved, or at least partially documented then it would massively help those who want to contribute (like myself) but don’t for fear of doing things wrong. The fear of doing something the wrong way is the single strongest reason why I often err on the side of caution and don’t make a change or contribute something new.

Good question! From a general point of view I want to see the project covering even more of the world than it already does. Specific areas like buildings are still massively lacking, even in the most populated cities in the world. For example, building coverage in London is pretty horrific, which is crazy considering this data exists and isn’t hard to create.

I’d also like to see a more refined and consistent approach to the meta-data involved with OSM. Again with the building example, tags such as height are massively inconsistent and could be in one of a variety of units or simply just spelled incorrectly!

3D is another area I hope to see OSM nailing in 10 years. There’s already a big push to improve OSM in this area and my hope is that we’ll be in a much better place in the next few years once an approach is agreed on. I can’t wait for the day when the London Eye can be described on OSM in a way that results in an accurate 3D depiction and not an ugly 3D box as it does currently.

I suppose my big wish for OSM in 10 years is that it’s reached a stage where it’s so widespread and so simple to use that contributions happen nearly unconsciously. I’ll be happy once the general public begin willingly contributing to OSM without needing to read through documentation or even knowing they’re contributing to OSM. If we can get people contributing to OSM through widespread consumer products then I can see some really exciting things happening. We just need to balance it with the desire to keep the project pure and true to its roots.

All in all, I’m with OSM for the long run and I can’t wait to see what the next decade brings.

Many thanks Robin, congrats to you and the ViziCities community. For those in London, Robin will be speaking at the November 4th #geomob (the geoinnovation event we sponsor).