I recently realized it has been a very long while since we had an update in our “tools we use” series of posts, where we look at tools and services we use to build OpenCage. Partially this long delay is because we rarely switch to new tools, we use what works and sticks with it, and we’ve covered those tools. But technology of course doesn’t sit still, there are always a few interesting things that emerge and become part of the tool chest. So we’re going to restart this series in the coming months.

Today I want to mentioned a tool called Reform that we use for creating web forms, both on OpenCage, but also for Geomob, our geospatial event series and podcast.

What I love about Reform is it really sticks to the “do one thing well approach” of being a simple, yet still powerful form builder.

With a few clicks anyone in the team - especially non-technical team members - can whip up a clean and simple (or even a multi-page) form that we can either link to or embed.

A few weeks back we announced our marketing experiment, working together with MapScaping to promote OpenStreetMap projects. We use a Reform form for the application process, here’s a screenshot of the form: 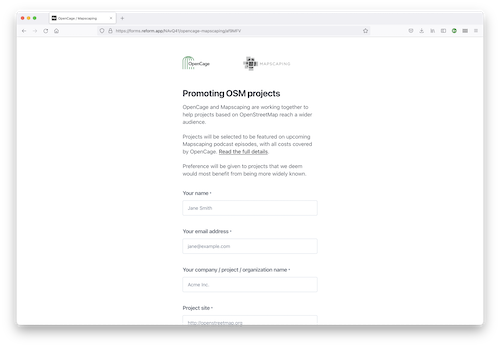 What you might notice here is the form is clean and simple, no distractions for the reader. Here’s a screenshot of the “form editor” inside Reform where we build the form. Simple and easy to use, but with lots of predefined modules I can drop in and configure - different types of text fields, email addresses, URLs, etc, etc. 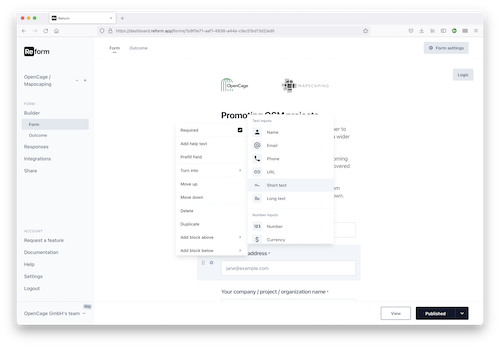 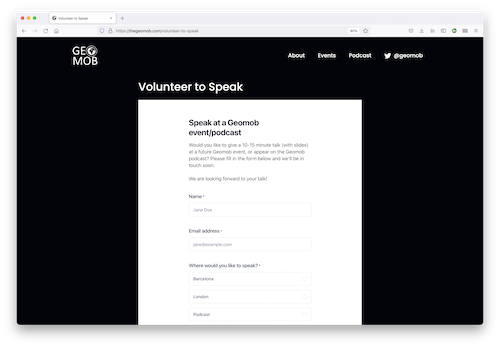 A simple form with no distractions (or Reform branding). Nothing to get in the way of people accomplishing the task of the form. We now use Reform as the signup form for our Geomob events. Super easy to set up, collect the info we need from the attendees, and then close/archive when the event is over. It works, as simple as that.

Another thing that makes Reform great is all the integrations behind the scene. Once a form is submitted you can have Reform pipe the data wherever it is needed (for example into Slack or whatever). It just works, and you don’t need to spend time fumbling about with complicated configuration.

What we would improve

Honestly, Reform is meeting our needs and the price point is entirely reasonable. There’snothing really to quibble about.

Of course, we did think it would be nice if they added a (by which we mean our) geosearch widget to the list of available input types, but as a new company I can see that they needed to knock of other, more common, input types first. We are here when you are ready, dear Reform team.

It’s often said “Making something simple is very complex”. We live that every day with our geocoding API, where we work hard to keep it as simple as possible for developers to geocode with open data. Reform has achieved it for the use case of web forms.

We hope exposing the list of tools we use to build OpenCage helps other entrepreneurs - geospatial and otherwise - at the start of their journey.