Everything that happens, happens somewhere.

This year’s State Of The Map Asia, happened in Bangalore, India last weekend. Members of the OpenStreetMap community met to learn the significance of this ‘somewhere’ from the perspective of the different countries in Asia - from Afghanistan to Vietnam. 300+ participants from 12 countries, where one in every six participants was a speaker congregated at the all-stone architectural masterpiece, the Indian Institute of Management Bangalore.

We were delighted to sponsor and attend the conference. This is the first of three posts by OpenCager Vivek Vijayan about the event. This post provides a general summary of the conference and in future posts we’ll go deeper on some of the themes that were explored. 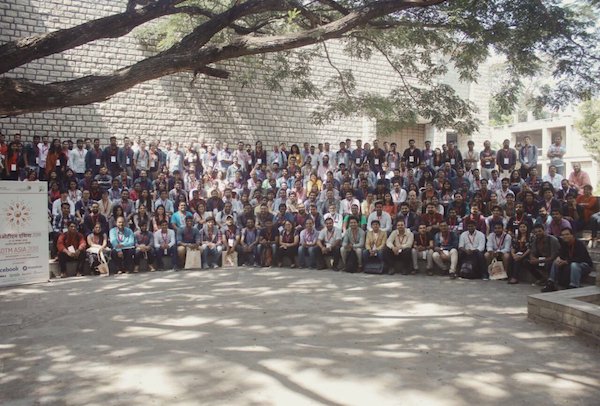 What were we talking at the conference?

Developing countries of South Asia (from where the participation was the most) have common challenges of rapid urbanization, population explosion, and strained infrastructure coupled with weaker institutions. With common challenges, patterns in the way maps were created, used and sustained emerged: 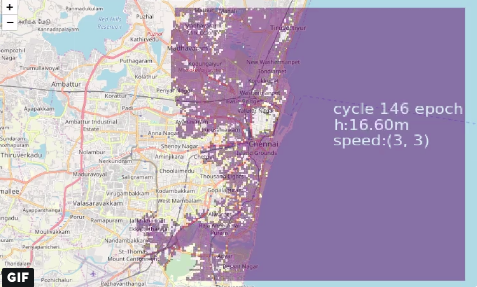 Michelle Evans, a Ph.D. student of the University of Georgia, is working on a project to predict dengue outbreak in urban areas. Only satellite data would not be enough to do such predictions as that kind of data does not offer insights into drainage and road types. She used OpenStreetMap (OSM) to learn more about drainage as well as crowdsource geography of water puddles - which are a perfect breeding ground of day-time mosquitos. Similarly, Pratap Vardhan of Gramener used OSM as mapping data (among other data) to predict that one would be safe in Guindy National Park with animals, before being airlifted - when flood affects Chennai!

Location is fundamental to decision making. The University of Chicago uses OSM to represent water quality with a temporal and spatial variation of data across lakes of Bangalore and rivers like Ganges and Godavari; this supports water management authorities in sound decision making. Similarly, Rishab Jain of SocialCops talked about how hand-drawn maps were replaced with clean OSM based maps to help the Ministry of Petroleum and Natural Gas establish cooking gas distribution centers at places where they were needed.

Community mapping democratizes knowledge and helps build resilience. Anita Deshmukh of Pukar described how the mapping of slums in Mumbai gave them an identity and a foot-in-the-door to talk to the government about inclusive policies for urban poor. On an individual level, Anindita Nayak of the Silence Of The Lamps fame, mapped over 600 street lights across 60 kilometers of a major road in Bangalore to highlight the fact that only 38% of the streetlights were functioning.

Maps do not just drive apps, but economies

While the consumer (or the common man) seems to view the map as a tool to reach one place to another or visualize some tactical aspects, the geospatial industry is where the use of map at enterprise or government level scales. Anasuya Dutta from the Geospatial World in a panel discussion on Business of Geospatial Data told that the new markets for geospatial data are urban development, infrastructure and financial sectors including insurance. The geospatial market of India alone is worth more than USD 1 billion and growing at a CAGR of 13.8%. For businesses, the veracity and reliability of maps become a very important factor.

Speaking about veracity and reliability, Facebook, which uses OpenStreetMap presented at the conference the biggest challenge - identifying, profanity and vandalism of maps. They started with an “all of OpenStreetMap (OSM) or none” approach but gradually shifted to localized ingestion from OSM which they term as LoCha (Local-Changes). 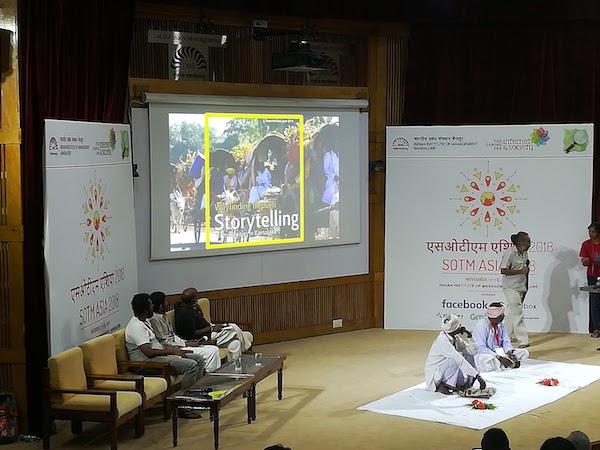 Maps are only denotative but stories are connotative. A community called Helavaru in the state of Karnataka (India) have been recording genealogy of all families in every town in ten districts of the state. Nothing special, except that they predate Internet by more than more than eight centuries as they have been traditional archivers since the 12th century. While we speak about community mapping today, they were the sacred geographers since almost time immemorial. The highlight of the conference was the representation of two seniors from this dying community which left all the participants humbled.

Overall it was a stimulating event. Many thanks to the organisers, sponsors, and speakers. We hope it serves as a spark to continue the growth of the OSM community in India, Asia, and the world.