While we often use the blog to interview and highlight OpenStreetMap communities and innovators around the world, we will be starting a new series where we look at innovative uses of geocoding. Today we’re delighted to chat with Peter Schröder, maker of weg.li, a German service to make it easier for German residents to report parking violations to the relevant authorities, and thus help make our cities more walkable, bikeable, and otherwise accessible.

To use the service people see a parking violation, take a photo, geocode the photo, and then upload it in the correct format and work flow for the relevant local authority. Basically it significantly reduces the barrier to getting violations reported and is now being used thousands of times per week. 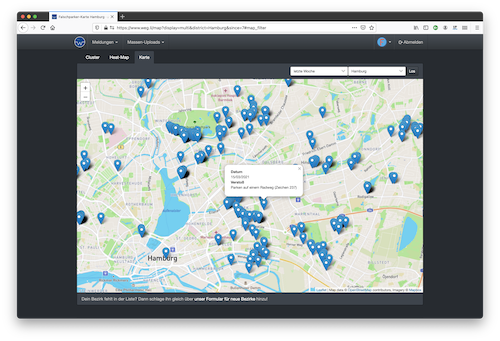 1. Who are you and what do you do? What is weg.li? What is the goal of the service?

As a software developer, consultant and entrepreneur I had the opporunity to work in many different companies on a wide spectrum of software projects in many different roles from coding monkey to CTO, mostly within a web context.

I consider myself polyglot and full-stack in the way that in my spare time I like working on and contributing to free open source software in all kinds of flavours.

My personal favourite though is Ruby and building web applications with Ruby on Rails.

The last project I’ve built using Ruby on Rails is www.weg.li a platform to report parking violations to German authorities.

Our slogan is “get out of the way! weg.li for secure bike lanes and free sidewalks”, this translates so lala

2. How did you come up with the idea? How many people are using the service? What is the response from government officials?

I started building the website in August 2019, mainly to scratch my own itch. People in urban areas have become so used to parking violations, that nobody gives a 💩 anymore!

Bringing my son to kindergarten every morning had become a frustrating experience, especially since he started using the bicycle. It’s a very dangerous slalom race for children with inconsiderate traffic participants.

Reporting parking violations through official channels was a UX nightmare, so I built a service to automate most of the tedious tasks of reporting dozens of violations that occur every day on the 10 minute route to kindergarten.

Government officials are often not amused by the amount of violations a couple of thousand weg.li users can generate per week.

Unfortunately, it’s rare that we get the impression that a city is actually happy about what the citizens are contributing to the safety of weaker traffic participants.

3. How do you market the service? How do new users become aware of weg.li?

We simply rely on word of mouth! Twitter and E-Mail are our main communication channels and we try to bring people together to solve problems and generate ideas with each other.

4. How does weg.li use geocoding?

One of the tasks of reporting a violation is to define the address of where it happens, the “crime scene” so to say.

Thanks to GPS on smartphones, we can leverage the EXIF metadata that usually comes with geo-coordinates.

5. What’s the business model behind weg.li?

There is no business model behind our service, but our awesome community supports our efforts through regular donations 😍

One thing that we are trying to monetise is the support of local agencies by implementing custom workflows so that the violations can be integrated into their existing software solutions. 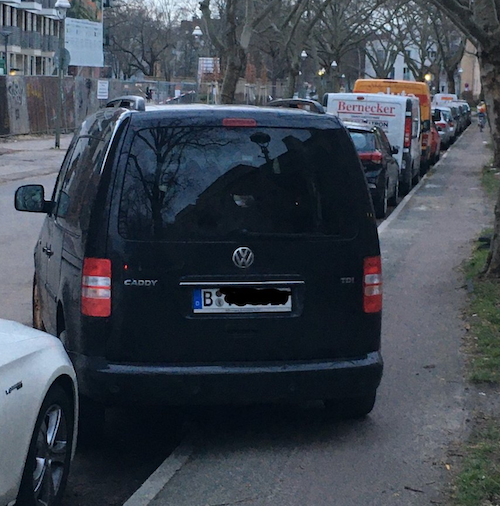 photo by Jon Worth

6. Any advice for anyone out there trying to build a similar service for their country?

It’s definitively a challenge to keep a good spirit because everything takes ages!

Whether it’s legislation, talking to officials, their software vendors or trying to change peoples parking behaviour, it all takes forever

7. What does the future hold for weg.li?

We were fortunate to connect with a lot of helpful individuals that support our goals, even given the minimal financial and human resources we have to offer 💗

Most recently we were able to propose a students projects in collaboration with TU Berlin. In that project the students built a neural network for recognising license plates and car manufactures in addition to a violation suggestion all integrated into an Android App.

Many thanks, Peter! For the interview, but also for all the work you and the weg.li community do to help make cities more walkable and liveable. Cities for people, not for cars, please! We’re delighted that OpenCage can play a small part in this great example of a service making it easier for citizens to interact with government.