Today, in the first 2020 edition of our long-running OpenStreetMap interview series, we have something a bit different. Normally we talk with representatives of OSM communities in different countries or perhaps states/provinces in larger countries, but today we chat with the man behind Twitter acocunt @OSM_Pontarlier, a smaller town in France. As you’ll read he is the only member of the local community, a situation probably shared by many OSM enthusiasts in less-populated or rural areas, so we thought it might be interesting to learn his perspective. 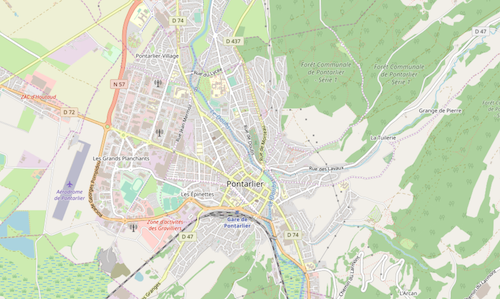 Hi! I’m a 21 year old man, living in Pontarlier, France since end of 2017. Currently jobless, I’m a tech enthusiast, in fact everything interest me. I don’t know exactly what got me into OSM, that’s many things in the same time. I was a “Google enthusiast”, I’ve really enjoyed using their products, seeing the way they work, their approach, all these Google ecoystem is really interesting ! I was a Local Guides active contributor, and also a Map Maker user. (Younger generations won’t know.) But almost since the GDPR entered into force, I slowly realized that, and it’s my opinion, this company is getting boring, mess with privacy and is unable to evolve (which was an important word for me to describe Google), and also not really ethic. It wasn’t a different company anymore, it was a boring normal company like many others.

I’ve slowly leaved the Google ecocystem, deleted Google Analytics script from my websites, looking for alternatives, and I don’t really how I went into openstreetmap.org. I saw I had an old account when I wanted to fix something, so, connected to it and fixed this thing. That was a bit more complicated, less attractive, than with Google, that why when it’s was done I closed the tab. A few days later, I wanted to give OSM a second chance, so, opened it again, and updated afew things again. And the next day. And over the time, I went deeper into it, keeping editing, started to follow Twitter accounts, discovered the Wiki, talk with members in IRC, and because web editor makes me feel struggle, members from IRC suggested to me to switch to JOSM. Amazing suggestion!

Since then, I’m really implied in OSM because I’ve saw the potential, I love the project ethic and vision, and I really love what I’m doing.

2. What would you say is the current state of OSM and the OSM community in Pontarlier and your area of France?

To me, the state of OSM in my departement is good, but still can be better. It’s good because we have “global mappers” who’re fixing and improving at France scale, or for some at region/departement scale. with French Cadaster of satellite imagery. They add roads, building, fix issues, etc. We have “traveling” mappers who, when they are in the city, add informations from their phones, or other who capturing images from their phone (eg : with Mapillary) and improve OSM when they’re at home.

The bad thing are, local contributors are missing, and things are changing every month. So, after 6 months, there’s new buildings, businnesses have closed/moved, etc. In my city, mainy things weren’t updated since 10 years. 17 000+ people are living in there, and I’m the only one who’s localy active. In the departement and region, there’s those “global mappers” who are improving the map of my city, but locally there’s not community, just contributors from cities near mine who’re improving around them.

3. What are the unique challenges and pleasures of OpenStreetMap in Pontarlier specifically, and smaller towns generally? What things should the rest of the world be aware of?

In the case of Pontarlier, the city isn’t reputed to be “trending” or “active”. So, here’s the deal : Are we supposed to say “That sucks there’s nothing” or saying “There’s nothing let’s build something” (wich is basically seeing an opportunity). The second option is fine to me, that’s why it’s an huge honor to contribute to build a project that will serve thousand of citizens, help them to have good alternatives who protect they privacy.

In the case of small towns, I’ve seen that many of us are contributing to big cities, and that small town are almost a desert of contributions. There’s many things to update/add, but people are just improving the Eiffel Tower again, and again.

Here’s something I love, it’s the “productive walk” in the forest, where I’ve explored almost all the paths in the forest while recording GPX files. I’ve added many of them and informations related to ground, incline, difficulty, etc. Walking is good for health, and permitted to me to contribute to OSM AND I’ve discovered every paths.

4. What is the best way to get involved? Is there a regular meet-up?

There’s no meet-up, personally I’m not a fan of meet-ups. Everything is happening online, where when I need help I ask on Twitter/Mastodon/IRC, things are faster online. I share some news on Twitter/Mastodon through OpenStreetMap Pontarlier. Also, I’ve planned soon to be on the OSM Wiki and having a mailist, as a member from OSM France suggested.

Also, I’ve recently created a Facebook account (I know, privacy…), because “older” people are in. There’s more activity there than on Twitter. The main goal is to get in touch with business owners/associations for adding them to OSM, being informed of local news, and also adding old/historical/local informations/names for improving OSM.

5. What steps could the global OpenStreetMap community take to help support OSM in towns like yours

Big question. Everyone has their own answer. Personally I think that in France, we’re in a good situation and the state of OSM is good, thanks to agreements between OSM France and governement that let us use Cadaster, agreements with IGN for an high quality imagery and more. Official datas helps. The situation is differents in others countries, so as good French citizen let’s say “Equality” is important in this case and we must find ways to give the possibilites to others countries to have the same OSM quality datas.

But my opinion is that we need a Google Maps alternative based on OSM. When I ask to business owners to work with me for integrate informations on OSM, it’s hard as hell to convince them. They don’t see any concrete tool based on OSM. OSM is used as map in many popular apps, but no real simple and cross-platform tool for datas. Being able to say a name of good tool would help.

6. Last year OSM celebrated its 15th birthday, so we are well into the “teenager” stage of the project. But what will it look likes when it “grows up”? Where do you think the project will be in 10 years time, both globally, in France, and in Pontarlier and surrounding region specifically?

Last year… It was just some months ago! ;-) Don’t make time fly too fast please! OpenStreetMap is like Wikipedia, it started with a crazy and ambitious idea too big to be realized. OSM is now 15 years old and is now unavoidable, many project are based on it, companies exist thanks to OSM, and people have followed the project, creating tools, services, etc. One thing is sure: OSM won’t die, and will keep being improved.

Now let’s start with the “creepy part” : I love OSM for its potential, its values, and the philosophy behind it. What scares me is that, in the future, someone will change the values. We must be aware of changes that will be in favor of companies, and the people who wants to run OSM Foundation. Also, we must be aware of the quality of the contributions, it’s not acceptable to have “almost correct work” work uploaded. To be honest, I’ve seen too many project, too many companies, changing over time for the worst. I’m absolutely terrified of the simple idea of OSM changing for the worst, it’s a project I love and I’m invested like no other one by the past. This is the project of any of us, for all of us, we can’t let a group of people saying it is while acting in the opposite way. So, before acting, make sure you have heard the arguments of everyone, make sure you personal integrity is not compromised.

The good part is, in France, we’re going to enter in the “second part”. I love call it this way, because the first part was the visual part, which makes OSM being used as map background. Roads, mountains, buildings, water, it’s visual. The second part gonna be informations, surface of roads, number of lanes, names, hours, old name, description, etc. Datas. For the rest of the world, hurry up, tools and technologies are getting better everytime, OSM will way better everyday ! And of course, the tools builds around those datas are going to be amazing. Mutually improved.

I’m quite optimistic for OSM, it has huge potential!

Thank you for taking the time to share your perspective and for getting the community going in Pontarlier!

I agree there are many reason to be optimistic. As a founder of a company that depends on OSM, is a corporate member of the OSM Foundation, and does a lot of work to educate our customers on the benefits of open data and OSM, I find many of the fears of corporate involvement in OSM to be obsessive paranoia. But as you correctly say, this is a project for any and all of us and we can all learn from each other’s perspective.