paying customers of our geocoding API can now have an additional annotation: the H3 reference for the center point of the result. H3 is an open source hexagonal hierarchical geospatial indexing system originally invented at Uber. Basically, it’s a way to divide the world into a hierarchy of hexagons. Having such a reference, and being able to quickly operate on the hierarchy it represents, can often be useful, and H3 references are increasingly used in a number of different geospatial applications.

Here’s an example of the H3 value in the JSON response of our geocoding API. 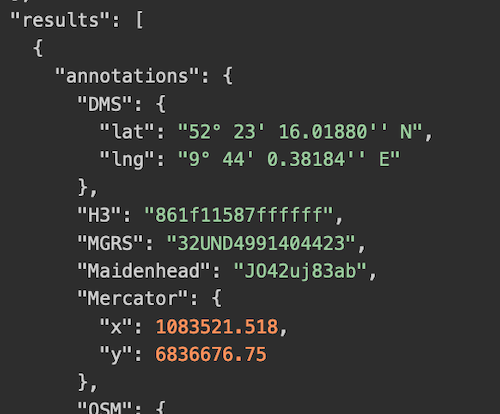 As with all our annotations, the new H3 annotation is documented in the annotations section of the geocoding API documentation.

To avoid unnecessary load and slowness, we are restricting this annotation only to paying customers. If you are a customer and would like it turned on for your API key please let us know.

This raises a more general question with the geocoding API annotations. Our goal with the annotations has always been to do various processing tasks and data joins that developers will need. Usually geocoding is just a small part of the ultimate task, and we want to help the geocoding API user with the true task he or she is trying to accomplish.

While many of the annotations have relevance for everyone, increasingly we have been adding niche annotations; very valuable to a small subset of geocoding users. But it feels wrong to hit all users with a speed penalty. Probably in v2 of our API (currently envisioned for 2023) we will probably switch to a model where annotations are off by default and then get turned on via an optional parameter, rather than the current model of being on by default and each additional annotation penalizing everyone. If you have thoughts or feedback on this please let us know.

Finally, As a reminder, if you don’t need the information in the annotations you can turn them off by using the options no_annotations parameter.