Our long-standing interview series returns with a discussion with geo-legend Gary Gale. As you’ll read below Gary has done so many interesting things across his career in geo, but today I am talk with him mainly about his work on the Vaguely Rude Places Map, a fantastic crowd-sourced cartographic collection of rude placenames. The sight is a delightful reminder of the joy of mixing geography with the internet.

Unfortuantely this popular site recently went offline because the hosting service it depended on went down. Lame!

It is my great pleasure to announce that we (OpenCage) were able to step in and now provide hosting for the service. We’re very pleased we could help, not just because the site is good geographic fun, but also because Gary is one of the inventors of OpenCage, as you’ll read below. 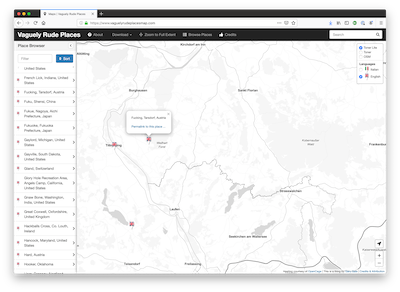 1. Who are you and what do you do? What is the Vaguely Rude Places map? 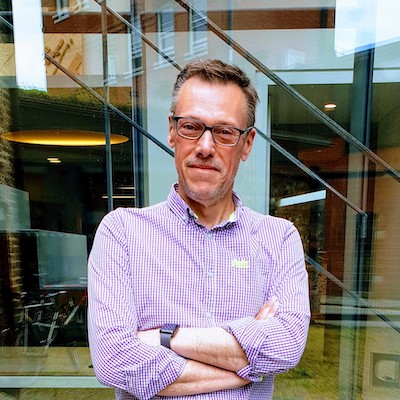 What I do is lead and work with teams who build web products using geospatial and other data and I’ve been a CTO of several companies since 2015. These days I work in startups or scaleups. There’s an energy and a drive in small companies that can’t be found in larger, more established organisations. That also means that the role of a CTO is many and varied and I still get to write code sometimes as well as the planning and strategy that’s more usually associated with a CTO. Right now I’m working for Kamma, a London based scaleup who’s doing incredibly clever and interesting work with geospatial data in the UK property sector.

The genesis of the Vaguely Rude Places map started some time in 2007. At the time I was working for Yahoo! in their Geo-technologies group, which came about when Yahoo! acquired a company called WhereOnEarth.com in 2005. WhereOnEarth had some very clever code and data which was destined to power Yahoo’s geotargeted ad campaigns. The data that made this possible was a global gazetteer of places, all linked together at an administrative and colloquial level by a unique id, called a WOEID. Eventually that same data and the GeoPlanet API, built on the data, to help Flickr geotag their photos, was used by companies such as Dopplr and even the British Museum to geotag their collections.

But also hidden in that data were a lot of places names that in their English translation were, well, vaguely rude. Actually some of them were completely rude. One Friday afternoon someone in the team extracted them all out, shared the list, we all had a good laugh and got on with the rest of the day.

Then one day, I think it was during FOSS4G 2013 in Nottingham, I was discussing this list of places and a close friend, Mark Iliffe, said to me, “You should make a map out of that” and the Vaguely Rude Places map was born. The rest of the story is in the blog post linked to below.

2. I think everyone can agree that sites like the Vaguely Rude map are the reason the internet was invented. What has been the public reaction to the site?

I pushed the map onto a web server at around the start of February 2013, with little idea what I’d inadvertently done. The full story of those manic early days are best told at length as part of a talk I gave in April of that year at GeoMob called How a Map Can Go Viral

People seemed to like the map, or maybe they liked what the map was showing, or both. Who knows? All I know is that it started proliferating across Twitter at a frantic speed. This wasn’t what I expected. This wasn’t what I intended. You put stuff onto the internet to satisfy whatever motive you have, whether it’s to blog, to tweet, to release code on GitHub or any other of the multitude of reasons. Most times it gets ignored. But sometimes, just sometimes, something strikes a chord and you find yourself on the receiving end of the phrase ‘going viral’.

As the map spread on Twitter and social media, so the hit rate on the site went up … on February 19th 2013 the map was racking up 48,000 hits per hour. In that month alone, the map was viewed over 30 million times.

The map got coverage in the Independent, Huffington Post, the Daily Telegraph and even in the Daily Mail, where that particular journalist lifted one of my blog posts about the map wholesale and peppered it with spelling mistakes including getting my name wrong. The comments on that piece were hilarious, including lots of outrage from people who thought I was making it all up, or that such place names should be banned outright on moral grounds.

There’s been a few more viral spikes since then, every couple of years or so when someone rediscovers the map and social media kicks in, but most days the map gets a regular audience of between 200 and 500 visitors, which is thanks to OpenCage for generously providing a server to host the map when my previous host sadly had to shut down.

3. What’s the process around crowdsourcing of new vaguely rude submissions?

Rather random, eclectic and uncontrollable. People who know how GitHub works open issues or sometimes issue pull requests (numbering 33 and 14 respectively), then there’s email submissions or Tweets as well. But however people add to the map, it continues to be rather wonderful when I get a new submission. Most of the time, new place names are obviously rude, but occasionally I have to scratch my head because I can’t for the life of me see how the submission is, well, vaguely rude.

4. The map is a fun way to show how strange things can get when humans name places. But in all seriousness, this is a struggle we deal with daily, but also one you have written about at length. A good example is your Guardian article from 2014 about the challenges of geocoding. How have things evolved since then? Is there reason to hope?

The challenge that remains and that I keep running up against on a daily basis is one of data.

In my current role we rely on open data. Some of it is what I’d term proper data. It’s been designed to be machine readable, is in a known format, has stable identifiers and has been produced by people who know how to make a data set and to keep it updated, fresh and current.

Some of it is open data that’s been produced, published and forgotten about. You only have to take a browse through the UK’s open data portal to see this first hand. There’s data and loads of it, but how much is usable?

In 2016 a study called the Databerg Report was produced by Veritas. It found that globally 33% of the masses of data is what’s called ROT data, which stands for Redundant, Out of Date or Trivial, in other words, unusable. Worse, 53% of data is Dark Data, it’s locked in documents or databases which can’t be accessed, it’s been forgotten about and will never be used. That leaves just 15% of the world’s data that is usable.

I’d argue that a lot of that 15% isn’t data, it’s information. It’s been published and forgotten about. It’s in Excel format, or PDF or CSV without column headings. This isn’t meant to be a criticism of the people who produce information. They’re not data professionals. They’ve been told to put a PDF on a website and that’s what they’ve done.

That continues to be where the journey is going, a quest for usable, accurate and current data. It’s a challenge we haven’t solved yet. I remain hopeful this will improve, but I don’t think it will be solved as even free and open data costs, be that in time, effort or cold hard cash.

5. You were involved in the original launch of the OpenCage geocoder, many years ago when we were still part of Lokku Ltd. Here’s a picture from the planning kick-off event when we went to the Prime Meridian in Greenwich. Any reflections on how far we’ve come? 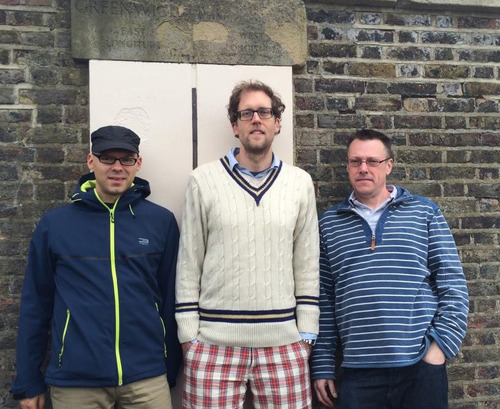 The OpenCage kickoff event at the Prime Meridian, many years ago.
Pictured are (from left) Marc Tobias, Ed, Gary

I’ve been fortunate in my career that over the years I’ve been able to look back and say “I did that” on projects that I’ve been proud of. From the (sadly now defunct) Yahoo! Geo APIs, to helping what3words grow and scale to my current role. One of my proudest moments was being at Lokku with the job title of “geotechnologist in residence” (surely the best job title ever) and having this crazy thought that some of Lokku’s technology could be combined with open data, including OSM and open source code to make a geocoder that could have a permissive licence, no vendor lock in and could be truly independent. I continue to use the OpenCage geocoder regularly (only a few days ago when I was updating the Vaguely Rude Places map) and the company continues to grow and to forge ahead. This isn’t just technology, code and data. To continue to benefit from open data and open source there’s a moral and ethical imperative to support and to give back and OpenCage does more than most to do this.

6. Final point - it’s fitting that a man who has the genius and motivation to bring the vaguely rude map to life, is also also the all time most frequent #geomob speaker (#geomob is the geoinnovation meetup we organize every few months in various European cities). As such any closing thoughts on the state of geoinnovation that you’d like to share with the readers? Where is the journey going?

Geomob is frankly awesome. I’ve been lucky enough to be there for the journey from the very first meetup. Every time I attend there’s always something interesting, always something slightly left field, always something which is just plain and outright crazy. From pet projects, to company initiatives to fledgling startups, the topics and themes are always fresh and never get stale.

Which is a pretty good reflection of the industry as a whole.

Maps and location have gone from being an industry sector to something that pretty much permeates our daily lives, on smartphones and other devices, on the web, in our cars, in our homes. It’s gone from a specialised niche to being ubiquitous and I don’t see that trajectory slowing down or reversing.

Thanks for the kind words, Gary, and for creating such an entertaining service. We’re proud to help support the Vaguely Rude Places Map online.