In this installment of our regular series looking at OpenStreetMap communities around the world we turn our focus back to the southern hemisphere with a look at the Argentinian community. 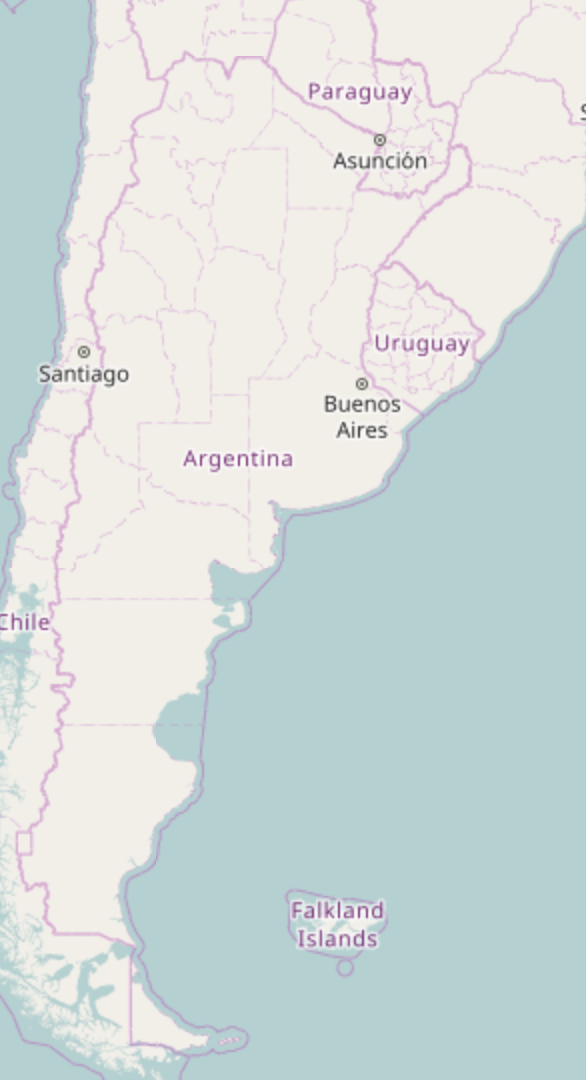 Hernán - My user is Hernan and I dedicate myself mainly to completing the map with the natural geography. At first, in 2008 I met the project, look for my neighborhood and how I found several mistakes in the streets and I fixed them since I am interested in free projects.

Gonzalo - I always liked maps. I started in Wikimapia and after few months I found OpenStreetMap in 2008, since then I’m mapping as ’Zalitoar’ when Argentina’s map was in its beginnings. I study systems engineering and somehow that and my activity related to OSM took me to work in software development in the Argentinean National Geographic Institute since 2015.

2. What would you say is the current state of OSM and the OSM community in Argentina?

Hernán - The state of the map at this time is very good. I calculate that most of the towns and settlements are mapped with their names, and a large percentage with the names of the streets and their addresses. The community at the moment is very dispersed, but a small group is making the effort to unite it to be able to face common projects. The biggest drawback is that the country is very rough and not all members are close, which makes it difficult to organize better.

3. What are the unique challenges and pleasures of OpenStreetMap in Argentina? What aspects of the projects should the rest of the world be aware of?

Gonzalo - The great challenge is to unite the collaborators of the community, to promote growth and plurality (reducing the gender gap for example) and in turn to carry out projects in common, achieving this I think that the rest is easier, such as having more contributions, improve the quality of data and even develop new ways of using them.

In Argentina we seek not only to increase the number of collaborators, but also to increase the relationship between the community and official and non-official organizations, such as academic institutions, government institutions, NGOs, and associations of all kinds, so that most of society can benefit from Use of the data that we construct. I think this is key to give a broader and deeper sense to what we do every day and at the same time it is possible that some of these organizations collaborate with OpenStreetMap in return for mutual benefit.

4. A few years ago SotM was held in Buenos Aires. What on-going effect did that have on the Argentinian community?

Gonzalo - We organized the conference with the intention of promoting the growth of the national community and also the regional one since an international SotM in Latin America had never been realized, it was a big bet but it paid off. The SotM 2014 had a great impact because in that event we proposed to representatives of other countries of our region to realize a regional conference and then in the following year, it started with the SotM Latam 2015 in Santiago de Chile.

At that time the people in Argentina did not meet frequently or carry out projects together. Some time after the conference, those initiatives began to appear and today we are in constant communication by chat - even in our group of Telegram there are people of other countries - and we are organizing a new State of the Map of national scope for October of this year.

We have done mapping activities among several collaborators, participated in events talking about OSM and even have gathered in spaces of official institutions such as the National Geographic Institute (IGN) which shows that the community has become much more known.

In short, the conference had a great impact not only locally but nationally and regionally, we have achieved with SotM Latam being in contact and carrying out projects with people from other Latin American countries.

5. What is the best way for people to get involved? Are there regular meetups? Where do people hang out online?

Hernán - One of the things we are doing is organizing regular meetings so we can get to know each other and work together. The plan is to be able to meet once a month. Virtual meetings are made by Telegram and the forum mainly. But the idea is to be able to meet face-to-face, usually in bars and for a couple of meetings could be held with collaboration of the IGN of Argentina.

Gonzalo - We also identified as an opportunity that it was necessary to strengthen communication with the rest of society. To do this we created e-mail accounts, Twitter and Facebook, we improved the wiki of our country, we developed a website and little by little we are getting all those channels managed by several members of the community, so that it is not only more representative but also that everything is not under the control of a single person. We also invite people from other communities and organizations to our events and meetings.

6. What steps could the global OpenStreetMap community take to help support OSM in Argentina and Latin America?

Hernán - One big problem I see is the number of editors who make a couple of edits and do not collaborate anymore. I think this is due to not knowing that there is a local community of mappers. It would be very good, when someone enters the map of OSM, there is a link to a list of communities or that the system detects the area from where it comes and shows a link to the local community. That way you could get more people to map and have a place to evacuate their doubts.

Gonzalo - In addition to what Hernán comments, we see as a good opportunity to promote regional events on the OSM website as is done with the international SotM.

7. In 2014 OSM celebrated its 10th birthday. Where do you think the project will be in 10 years time, both globally and in Argentina specifically?

Hernán - I believe that the project will be established as an indisputable place of consultation of geographic data for organizations and governments. You are already seeing the use of OSM maps as the background layer for many projects and I think this will increase as you see how the map data quality improves.

Gonzalo - Adding to the above I note that most of the members of the OSM Foundation are from Europe mainly, in this sense and at the general level (contributors) I believe that the representation of the project will be more diverse including more and more people from different parts of the world, we will see reduced the gender gap and increase the number of collaborators where there are few thanks to the efforts that the entire community is doing right now around the world.

Muchas gracias guys. Congrats to you and all the members of the OSM Argentina community, great to see it is growing, and that SotM helped to kickstart things. Keep pushing!