Our interview series looking at OpenStreetMap communities around the world continues today with a discussion with Mohamed Marrouchi from Tunisia. 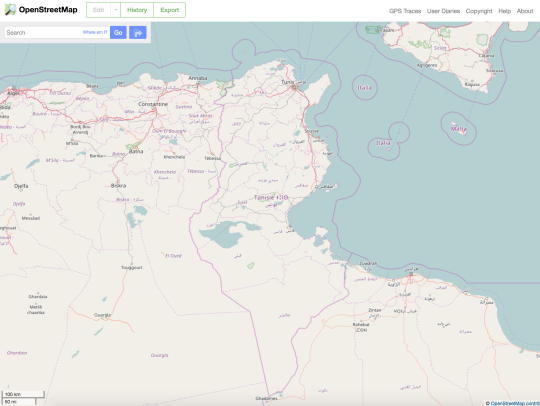 My name is Mohamed Marrouchi, (OSM id marrouchi), and i’m a software engineer experienced mainly in web development. I’m also the president of Freeways Association. As a FOSS advocate, i’m working on promoting Open Source and Free Software in Tunisia. As part of this i’ve got involved in OSM in summer 2016 and i’ve been enjoyed OSM mapping since.

It all began in August 13, 2016 when we managed to celebrate OSM anniversary. The event was co-organized with Freeways, Nomad 08 and OpenFab Tunisia. The goal of the event was to raise awareness and encourage the use of this free (like in freedom) map environment. There were presentations, workshops and especially a birthday cake.

After this turning point we managed to host a monthly workshop called “Carto’Party” in order to train people on online mapping using ID editor. We did five workshops so far and I hope we will do more! All events are posted in a dedicated Facebook page.

A picture of some mapping training from a recent Carto Party: 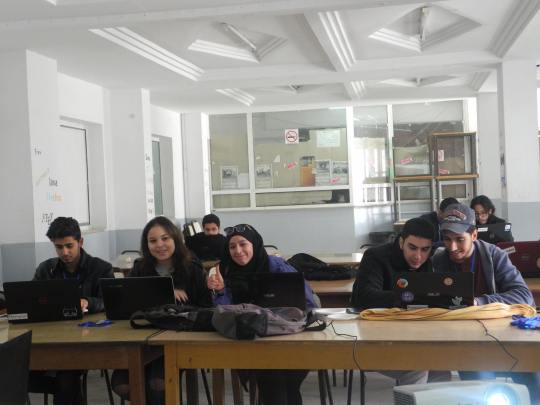 2. What would you say is the current state of OSM and the OSM community in Tunisia?

I think that Tunisia has cities that are well mapped in OSM. But they are the cities that have the most number of population and that have the more developed economies. We find that these cities are mostly located in the east coast such as Tunis (the capital), Sousse, Sfax, Djerba …

There is a lack of cartographic data in various cities across the Tunisian territory. They are mainly located far from the east coast and in the south of the country. These regions have been neglected by the government for many years and suffer real problems in infrastructure and a bad economic development. One good example to cite here, is the website watchwater.tn that gives the ability to citizen to post alerts about water shortage in their sector. 80% of the addresses that were posted are not recognized in OSM. We find grey tiles and sometimes it’s hard even to locate the place exactly on the map.

Also, there is a lack of Arabic translation of the locations (Streets, Quatiers, …). Some data are in French and others are in Arabic. The problem here is that an Arabic word can be written in various ways when in French or English. This mainly affects road names and causes problems when searching for locations (geocoding).

In the last months we worked hard on mapping the administrative boundaries (level 5 & 6) and the municipality’s boundaries. It has been very hard since we did not have the chance to get any good data that can easily be imported. I’ve reached out to many public institutions and I did not get any positive response. So we managed to map the administrative boundaries with the help of some pdf documents issued by the government using JOSM and the Piclayer plugin.

This could never have been possible without the help of Ivan Garcia an active OSM member that helped us in getting familiar with JOSM, encourage us and guided us through all the technical difficulties that we were unfamiliar with. Ed Freyfogle from OpenCage Data was there all along, he supported us and thanks to him we produced a better map data quality. The OpenStreetMap Algeria community also helped us by mapping the sectors that nears their country. This work has been made by Tunisian contributors such as hajer-oualha, kleiner knopf, dalimay28 and myself. That said, the State of OSM data in Tunisia is pretty good because there will always be a handful of volunteers that will keep pushing the map always forward.

Here’s a picture of Mohammed presenting about OSM at a @ Software Freedom Day 2016: 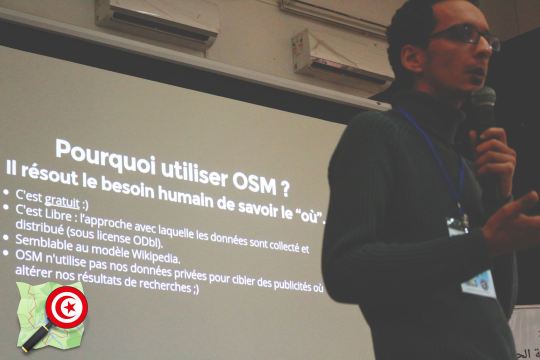 3. What is the best way to get involved? Are there events, mapping parties, etc?

Events and mapping parties are a not the best way to get people involved in OSM. From my experience and in my humble opinion, i found that not all participants are interested to continue mapping in OSM after attending a mapping event. I think that gathering those who do work in projects that uses OSM as a base layer is the best and efficient way to contribute in OSM.

4. What steps could the global OpenStreetMap community take to help support OSM in Tunisia?

If there is one thing i could ask from the global OpenStreetMap community, it will be coming to Tunisia and train people to become OSM experts. It is through this sharing of knowledge and this kind of connection that we can form a good link to the global community. It seems to me that we are a little removed. Until now we have managed to train ourselves thanks to the resources that has ben made available on the internet (OSM Wiki and others).

5. In 2014 OSM celebrated its 10th birthday. Where do you think the project will be in 10 years time, both globally and in Tunisia specifically?

I think that in 10 years, OSM will be, as Wikipedia, one of the essential references on the internet. I think also that OSM will offer people another tool to make a better living. The OSM project will prove that we can achieve more when working hand and hand as a community and keep on pushing the free software movement further!

Thank you Mohammed! It’s been a pleasure working with you and the others to help get the admin_levels for Tunisia mapped. My hope is the same as yours - that by getting the basics right more and more people will see that OSM is a great (and free) tool they can use, and that once they start using and depending on it they will also start contributing back. Best of luck to you and the rest of the Tunisian OpenStreetMap community.