After a bit of a break we resume our interview series looking at OpenStreetMap communities around the world. Today we’re fortunate to speak with Vivien Deparday about OSM in Sri Lanka. 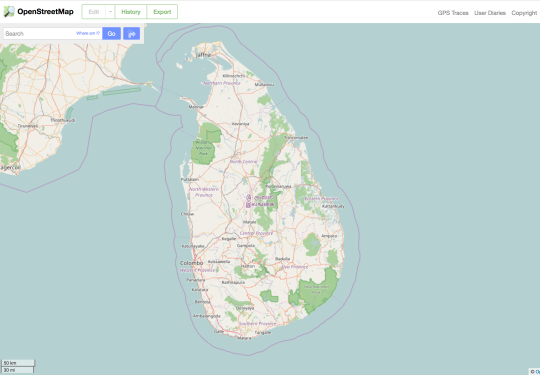 I am Vivien Deparday, and I work at the Global Facility for Disaster Reduction and Recovery (GFDRR) at the World Bank where I lead a program called Open Data for Resilience Initiative, and I also like mapping for fun when hiking and running. I have been working with Open Data and Open Source since about 2007 for fun, personal interest, ethical reasons, and for part of it as a job. I got into OpenStreetMap first when I studied Volunteered Geographic Information and Community Mapping during my Masters’ thesis. At this point, I was more of an observer, I started to contribute in 2009 when the city of Ottawa, where I was living back then, did an Open Data App contest (the website is still partially up !), and it coincided with a break period for me because of immigration paperwork. For this app contest, I wanted to develop a bike and multi-modal routing application, and I found that OpenTripPlanner and OpenStreetMap were the best way to do that so I started to fix the data in Ottawa, and so on… Then, three years later, I got a new job, and went to Sri Lanka to work on a project that used OpenStreetMap to create base maps for disaster preparedness and resilience. Although I have been involved quite a bit and still am with OSM Sri Lanka, I am not one of the core day to day member, other people quoted below deserve more credit! Also, Robert Banick from our team has been participating in the Sri Lankan OSM community.

2. What would you say is the current state of OSM and the OSM community in Sri Lanka?

I would say that the OSM Community is still very nascent, they are a couple very active users doing most of the work, I suppose similarly to most places. There is also a small academic community at Sri Lanka Institute of Information Technology (SLIIT), and the University of Colombo, and contributions from the government through the World Bank projects but there are still very few organic community meet-ups, especially outside of Colombo. That said, the State of OSM data in Sri Lanka is actually good  because there are a handful of very, very dedicated users with thousands of edits (Ajith,  Sadeepa, Thilina, Suthakaran to name just a few) doing a lot of work.

The big use case in Sri Lanka is navigation, because outside of Colombo Google Maps can be pretty basic. The Sri Lankan OSM community spends a lot of time creating roads and getting all the small details of them right so they work well in dashboard GPS applications. There are a couple hundred non-contributors who download and use their monthly updated GPS-compatible extracts of OSM. That’s all coordinated and hosted at the Sri Lanka OSM forums (listed below).

Besides this big bulk of the contributions, our team worked on two pretty large projects with the government, the Disaster Management Center and the local governments, one on the Eastern coast near Batticaloa and one on the West coast near Gampaha. In both of those areas, a lot of mapping has been done, all buildings were mapped and surveyed on the ground with about 7 to 8 attributes each to create a base map and dataset for disaster resilience and preparedness. We mapped about 40,000 and 150,000 buildings in each area, respectively, not to mention thousands of kilometers of roads, tracks and paths. Some of the local government organizations have continued to map larger areas and update some others.

3. What are the unique challenges and pleasures of OpenStreetMap in Sri Lanka? What aspects of the projects should the rest of the world be aware of?

To start with the challenges, it is still very difficult to grow interest in OpenStreetMap, to organize meet-ups and grow the community. Recently, an event was organized with Mapbox to raise awareness in the private sector to diversify the community but uptake has been a very slow. Another challenge in Sri Lanka is that lots of savvy local contributors go abroad for studies or jobs, creating a brain drain on the pool of current and potential OSM contributors. Although, these challenges, I am sure, are not quite unique to Sri Lanka.  I think the main aspect of the project that people should be aware of, which is also one of the main pleasure, is that there are some very passionate people in civil society, academia, government who are working increasingly together to make the map better. The biggest Sri Lankan OSM contributors from civil society collaborated with the World Bank and the Government to provide trainings to undergrad and students in various universities in and around Colombo. During the flood in 2016, some mapathons were organized locally at SLIIT to get students to map affected areas for the map to be used by the Disaster Management Center. Slowly, the collaboration is becoming more effective and the data more used. We are also increasingly speaking with the Sri Lankan government about incorporating government data directly into OSM and updating it there, which would be a huge win not just for OSM but open data in general. Sri Lanka is also a beautiful island country and mapping is a great excuse to roam around amazing places.

4. What is the best way to get involved? Are you looking for remote support or trying to get locals as your primary mappers?

As anywhere, the best way to get involved is to start mapping, to reach out on the forum on one the communications channels for help or to meet up with other mappers:

Mapping locally is most often better, getting some energy locally but some remote mapping is also always helpful. If you travel to Sri Lanka for holidays do not hesitate to add GPS tracks to OSM, always very useful to align various imageries!

5. What steps could the global OpenStreetMap community take to help support OSM in Sri Lanka?

Anything to help raising the awareness of OSM in Sri Lanka, through social media, meet-ups, training at universities, or other means would be great. Further, as it has been done at some conferences, I think finding money for travel scholarships is really great, it helps linking people from various communities in Asia and around the world. In a lot of developing countries, the user community is small and it is hard not to feel lonely, so meeting other communities goes a long way! Similarly, some grants for local projects using OpenStreetMap would be great. HOT’s recent microgrants are a great example: I cannot tell you how excited my OSM friends in Sri Lanka were about them and I think many applied.

6. In 2014 OSM celebrated its 10th birthday. Where do you think the project will be in 10 years time, both globally and in Sri Lanka specifically?

In 10 years, I think that OSM, or a potential “re”-incarnation will be the most ubiquitous map data source, and that most data sources will have converged there. There will be very little difference between authoritative and official data, and OSM, the two working harmoniously together, and also merging with other data sources. It will be taught in all universities. This will be driven by the advances in technologies that we have been seeing: between having more and more satellites and remote sensing products available, more drones, progress in AI imagery feature extraction and change detection techniques, plus all the sensors out there, particularly phone check-in in various places…there is a lot of potential to help OSM mappers to have faster, more focused, more effective, and more fun contributions. So it means that it will become much faster and cheaper to maintain a global open map at scale. One of the key to success is that major public and private sector actors collaborate with the civil society, but it seems like it is the natural force and evolution, and the direction things are already moving in with several examples of government and corporation trying to collaborate with OSM.

Many thanks Vivien, to you and everyone working on Sri Lanka. Great to read that the HOT micro-grants were well received. I agree it can be lonely mapping in isolation, it’s a problem I suffer in my neighbourhood even here in Barcelona.Making people aware of the global community - that together we’re all mapping the world! - is one of the reasons we do this interview series.