We start things off on the blog in 2017 just as we ended it in 2016 - with an installment of our interview series looking at OpenStreetMap communities around the world. Today we speak with Martin Raifer from the OSM community of in South Tyrol. 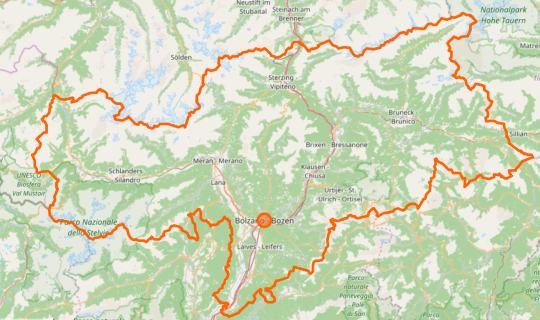 Hi, I’m Martin Raifer, in OMS I use the nickname “tyr_asd”. I first got into OSM after I got my first GPS-enabled smartphone in 2009. I did immediately see the huge potential in OSM of having a much more detailed map of the world than what any commercial supplier can and will ever achieve, much like wikipedia is so much more detailed than any of it’s competitors. Among my first uses of OSM were the planning of personal hiking and mountain bike routes. And even though OSM was clearly not as complete as commercial topographic maps of that period, OSM still helped to find better routes by providing information about drinking water points which I couldn’t find on any other map.

2. What would you say is the current state of OSM and the OSM community in South Tyrol?

I would say that OSM is doing very well in South Tyrol. Im my opinion, it’s probably already the best general purpose map of the region: Base map features like the main road network should be almost complete and even details such as individual buildings are already well mapped in most of the region. Of course there’s still a couple of lesser walked hiking paths to be mapped, or road attributes like maxspeeds to be completed, or POIs to be added. But overall, it’s very usable and I’d recommend everyone visiting or living in South Tyrol to try OSM-based maps and services!

3. What are the unique challenges and pleasures of OpenStreetMap in South Tyrol? What aspects of the projects should the rest of the world be aware of? In particular can you discuss how your region’s bilingualism (German and Italian) plays out in mapping.

South Tyrol has a few specific characteristics, which differentiate from other regions. First, looking at its geography, it’s a very mountainous region. And it is also touristically well developed. This means that large parts of the province are relatively sparsely populated, yet it’s still important to map those areas well, in order to have good maps for hikers, climbers, mountain bikers but also emergency forces.

Second, the province has more than one official language: Italian and German are used equally in parallel (and in a couple of towns, a third official language – Ladin – is further added to the mix). This means that each town, place, and even each street has two or more official names. In OSM, the mapping convention that was established is such that all official names are put into the “name” tag,  while each individual language gets its respective names mapped in a dedicated name:de, name:it or name:lld tag. That reflects the situation on the ground the best, since those names are also signposted multilingually on the ground - here’s an example of how this looks like in practice. This makes mapping at bit more cumbersome, as not every OSM editing software allows one to add multilingual names easily. Also, many external mappers (for example tourists) may not be aware of the situation.

4. South Tyrol was one of the very first regions in the world to receive a large donation of open government data. How has that impacted the project in the area? Is OSM now used by government locally? What is the relationship between the community and local government?

Yes, indeed the city of Meran/Merano (the second largest one in the province) has donated its geodata specifically for OpenStreetMap. This was back in 2007(!), when having building outlines in OSM was still a rather rare and exciting thing, so it made for a really nice looking map at the time. The downside of this import was that the data was imported only partially and had some technical issues, wich have only been fixed by the community much later on. A second significant import was about the addresses of the whole region in 2014, which have again been donated by the local government specifically to OSM.

The local administration was always very supportive towards the OpenStreetMap community. For example, it did always allow the community to use their aerial imagery and official maps for OSM mapping, even before they released most of their geodata as open data under the CC0 license in 2015. In fact, OSM is already used by the local government as well as many tourism agencies (e.g. www.merano-suedtirol.it) for providing the general public with maps. I think they do prefer OSM because of its ability to map the local truth (multilinguality, non-motorized-traffic infrastructure, natural and land cover features, etc.) better than other commercial mapping alternatives. That’s really great. :)

5. What is the best way for someone to get involved in the local community? Are there regular events?

Just start mapping, I would say. :) We do have a dedicated mailing list, where anyone can contribute in the occasional discussion or ask and answer questions. Currently, there are no regular mapping events or meet-ups in South Tyrol. The nearest regular events are in Trentino (the neighbour province just south of South Tyrol) or Innsbruck.

6. What steps could the global OpenStreetMap community take to help support OSM in South Tyrol?

I’d say: If you can: come visit and get yourself at picture of what a bilingual region actually looks like. I’d love to see more tools that work well in multilingual regions: both OSM mapping software, as well as “consumer” apps and maps.

7. In 2014 OSM celebrated its 10th birthday. Where do you think the project will be in 10 years time, both globally and in South Tyrol specifically?

Well, I do hope that OSM continues to mimic the success story of wikipedia, and eventually becomes the de-facto source of general-purpose geographic data. And especially for South Tyrol, with its special characteristic of great natural and cultural diversity, I think this can will give the people back the ability to represent their own land by themselves.

Many thanks Martin! Great to see OSM continue to thrive in a region that was one of the very first to get going. Also, as someone who lives in a multi-lingual region myself, great to see OSM being used as a tool for help cultural diversity thrive. Finally, as someone who has himself enjoyed the great hospitality and natural beauty of the region, I can only echo your call for everyone go come visit. It is great.