Today we turn our attention to the OpenStreetMap community in Belgium. This year is a big one for OSM in Belgium as in late-September they will be hosting OSMers from around the world in Brussels for State of the Map (tickets are now on sale and you still have a few days to submit a talk).

Many thanks to Joost Schouppe, Ben Abelshausen,  Jo Simoens, and Marc Gemis for taking the time to answer our questions. 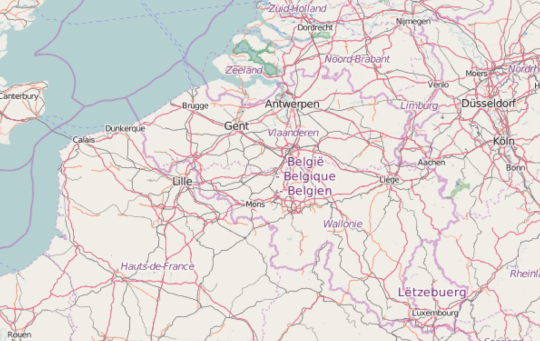 Joost: Fell in love with OSM when it helped avoid the crowds on a popular hike in France. Started mapping after using OsmAnd in the Dominican Republic - adding missing roads and the like.

Ben: I got into OSM because I needed data for the road network for a routing project… very boring I know! At the time I just used OSM-data to experiment and figured we would buy data somewhere once we had a proof-of-concept but it was amazing to see how fast the map improved and eventually we just kept using OSM and improving it along with our project.

Marc: OSM prevented me from becoming a criminal. I wanted a free map for my Garmin and was looking for hacked Garmin maps. Luckily I found http://garmin.openstreetmap.nl

Jo: The possibility to combine an outdoor activity with improving computer and programming skills.

2. Any truth to the rumour that you all got into OSM just for the fun of mapping Baarle-Hertog ;-)

Marc: Unfortunately, only one mapper had the fun of mapping it, the rest joined to map their favorite friture, pub and chocolate shop :-)

Jo: Definitely an interesting spot to put on the map, but there are so many others that have their own challenges.

Marc: More seriously, according to the regular interviews we do, several people map because they are interested in open data or need a map for hiking or cycling.

3. What would you say is the current state of OSM and the OSM community in Belgium?

Joost: I feel like it could be much better and much bigger - whenever we do outreach activities, there are so many people who don’t really know OpenStreetMap. And some of them actually do start mapping. But we shouldn’t complain either. We have a lot of heavy mappers and several people stepping out of their comfort zone and organizing or helping at events. The Meetup group started by Ben and Jorieke did much to turn mappers into organizers. And now organizing Missing Maps mapathons has made it much easier to reach new mappers and even the press. It remains a challenge to turn humanitarian mappers into complete OSM mappers, but we’re getting there. We’re also often contacted by local organizations who want to do something with OSM, especially people interested in paths and forgotten roads. It’s a challenge for us to work with them, as there is hardly a formal OSM Belgium organization.

Then there is more and more quality open geodata available, which presents challenges to try and use. Luckily there’s a consensus about wanting “semi-automatic” imports only, but that means we need technical solutions which we don’t always have the manpower to develop.

Jo: There is definitely still room for ‘growth’.

4. What are the unique challenges and pleasures of OpenStreetMap in Belgium? What aspects of the projects should the rest of the world be aware of?

Marc: Belgium is a small country, which means that within 300km you’ll find beaches and some ski slopes, areas with a high density of buildings, but also farmland and forests, as well as a lot of heritage and wayside chapels. This means that you need to learn a lot of different tags to map all the things you encounter during a 2 hour survey.

Joost: It’s a dense country as Marc said, but also a chaotic one.  For example, you can hardly expect to draw one residential area for a village, as there are bits and pieces of built-up land connecting most all villages together.

A Map of Belgium from Joost - dark areas have complete landuse tag coverage. 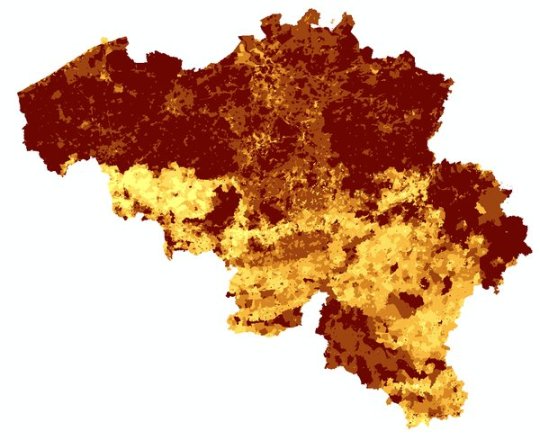 5. What is the best way for a new mapper to get involved in the community?

Marc: Although Belgium is small, we do not have a lot of face-to-face meetings. I do not know what’s the reason for this. Perhaps we do not live close enough to just do this on an evening? Perhaps some do not need those meetings and prefer to be left alone?

We do have Missing Maps meetings on a more regular basis, but I do not see this as the ideal way to get people mapping locally.

Most communication between the mappers seems to happen on the mailing list, although it is not a very lively mailing list. When I see the Dutch or German forum, I have the impression that those communities are more alive. Perhaps we prefer to map and be left alone, or perhaps the different languages make things more difficult, I do not know.

Joost: You do need to invest some time to become part of the community. To really be in the in-crowd, you need to register to the talk-be mailing list. It took me personally a long way to accept that - I discovered you can make OSM style mailing lists painfree in Gmail if you filter and label. Then they skip your inbox and go straight to a folder which you can access when you have a little time. Very important: do not use the Digest mode. It makes communicating completely impossible.

We do have a Facebook group but just about 50 members, one or two of which are active. Our Meetup group is more useful, though we need more local meetups to just talk about OSM. Lately, all energy is going into SotM and Missing Maps. If you’re new, I’d suggest joining the Meetup, create an event near you, and surely some people will show up. We have about 500 followers on Twitter, which isn’t much, but it does seem to be an interested crowd. And we recently started a newsletter, because we started having lots of contacts and not having a way to contact them.

Jo: Subscribing to the mailing list and announcing you want to participate in (or better yet organise) a meetup near to where you are.

6. How does the multi-lingual nature of Belgian society play out in the OSM community?

Joost: It’s entirely impossible to have a reasonable discussion with people from the other side of the language divide. Just kidding, it feels like a non-issue most of the time. OSM adapts easily to a multilingual situation - though it can get complicated if the left side road name is picked by a Flemish “facilities community” (not bi-lingual, just Dutch with some exceptions to accommodate French speakers) and the right side by a French community.

Our communication is very often in English, which does exclude a part of both Dutch and French speakers. There is no real solution for that, but it’s probably better than sticking to our own languages.

One thing we have to keep in mind all the time is that success in one part of the country, does not imply it happens in the other part too. A few years ago, the French speaking community was more vibrant, now it seems like the Dutch community has more activity.

Here’s a chart of contributor activity by region from a post by Joost last year.

7. What impact are you expecting from having SotM in Belgium this year?

Joost: Marc is referring to a recent event we helped organize, where 200 mappers at 7 universities mapped 50.000 buildings. It was on the Saturday evening TV news on both of the most important channels. Marc was interviewed himself, and the news item had the missingmaps.org url in the picture the whole time! You can watch here.

Jo: Hard to tell. It’s not an event that’s open for everyone like FOSDEM. So you probably get GIS professionals, but it’s unlikely you’ll attract new “amateur” mappers. There is also the HOT summit in the day leading up to the SOTM.

Ben: I’m seeing an opportunity to further expand our actual OSM-BE organization with real memberships (maybe a signup sheet at the conference) and maybe get Belgian local companies to sponsor us a bit after they see we can do something real for them like SOTM. At the moment we need like €100/month to support some community projects but we grow every day. This could potentially make us stronger but a lot of resources have also been going into organizing SOTM. We are a tiny community compared to Germany, France, the UK… this means we’re struggling a bit to keep up.

8. Our final and standard question: in 2014 OSM celebrated its 10th birthday. Where do you think the project will be in 10 years time, both globally and in Belgium specifically?

Joost: There is the chance that our model will fail, succumbing under the weight of its own data. But that’s unlikely. (Just like those waiting for the wonders of linked open data, those waiting for the miracles of algorithmic mapmaking might be waiting for a long time still. While we the whole time have been -doing- things instead.) I think it will be exponential. As the data becomes the best for a certain subject (say, car navigation), more and more people will use the data and see the point of contributing. That helps create the critical mass to make it seem worthwhile to map something else (say hiking paths, monuments). As we become the best source for those new things, we attract more people again. And so it goes wave after wave, with each wave coming faster than the last.

The human mind is really bad in making predictions about exponential evolutions - so I’m expecting to be really surprised about our timid predictions back in 2016. But that’s only if we succeed - if we fail, we will have sunk into irrelevance by 2026. In Belgium, I see the possibility of official data providers giving up their authority, simply because they won’t get the funds together to make an “official” map when a free unofficial map is available - and better than what they have. We are seeing the first baby steps in that direction already.

Jo: I seem to have mislaid my crystal ball. Should have marked it as a POI… On the one hand I think our “ant army of mappers” is an unstoppable force and once you get the hang of it, it’s quite an “addictive” thing to do. We’ll need to keep working on spreading the word, but building a community is harder work than going out and map oneself. A different kind of effort.

Many thanks everyone for speaking with us and for your efforts o promote OSM in general. I hope SotM can be good spark to help take OpenStreetMap and the local OSM community in Belgium to the next level.

I look forward to toasting you all with a Belgian beer in Brussels in September,