Our look at OSM communities around the world continues with a look at how things are going in Cuba. We were fortunate to be put in touch with Laura Barroso, and emailed about the unique challenges the community on the island faces and how they are building momentum.

1. Who are you and what do you do? What got you into OpenStreetMap? Amongst other things you’re the creator of MapaDCuba, what is that?

I’m an android developer at the National Software Company of Cuba (Desoft). Currently I’m working with the weeklyOSM team as a head of the Spanish team collecting news and making translations to Spanish every week. I entered the OSM world when I develop MapaDCuba which is a map mobile application that displays the Cuban map, allowing the user to make marks and create different kinds of routes and once those are created voice instructions are delivered on every turn point which came in handy for all drivers. The system allows you to save them as well, the user can choose different map themes and the kind of routes that should be created (minor time or shortest); I think one of the best qualities of MapaDCuba is the minimal space it occupies which is less than 40 MB and of course the fact that is created completely using OSM libraries like MapsForge and Grahhopper…all of this in an offline mode because of the connectivity situation that Cuba has (most of the time people don’t have internet access, only in selected areas and paying the service).

2. You’re also involved in the Spanish language OSM Weekly. In the last years there seems to be a surge in interest in OSM in the Spanish speaking world, why is that?

I think it’s because people realize that they can be a participant in what’s displaying on the map; and maybe if something is wrong or is missing can be fixed right away; they don’t have to wait for the next version to came out to see it well mapped….they can collaborated and all is free! People realize they can act independently of big companies like Google to see their neighborhood on the map and that’s what makes OSM different. Right now the community sense on the Spanish speaking world is growing.

3. What would you say is the current state of OSM and the OSM community in Cuba? What are the unique challenges and pleasures of OpenStreetMap in Cuba? What aspects of the projects should the rest of the world be aware of?

From my point of view the state of OSM is getting better and better. People are realizing that it is really effective and governments too; you could see an example of the Ecuador situation how fast could all be mapped with OSM and communities. You have to think of OSM as a way to bring people together which it clearly does. Sadly the OSM community in Cuba is not as active as others communities in the Spanish language world like e.g.: Mexico, Spain, etc. Access to internet is not only slow but restricted to specific areas. The collaboration to OSM depends on availability of cheap internet…Actually the mailing list has almost 0 activity except for the weeklyosm that’s announced there every week; there has been two main activities between this year and last year; the last one was related to Havana Conference which some guys take a bike and started to map some parts of the city. In my opinion what impedes us the most is the lack of communication, not being connected all the time can really be difficult to sustain this kind of thing. Not only because in order to upload data you need to be connected, but because promoting an event can be difficult and lots of people who could be interested and collaborate on the event don’t get notified. Communication is essential.

4. Recently for the first time there was a large open source tech conference, Cuba Conf, with a lot of talks about OSM. How did it go? Was there a lot of interest?

They mix all the conference in a big one which was really interesting because first there was an introduction to OSM, what people do with it, organizations and such, and at the end there was this amazing presentation about how OSM was a key point on the earthquake response for Ecuador. There was a workshop on OSM tools as well, with presentations on a few OSM tools and how can be used. This one was really interesting because they focus mainly on how those tools could be used on Cuba. And yes, people were really interested.

Some pictures from Cuba Conf: 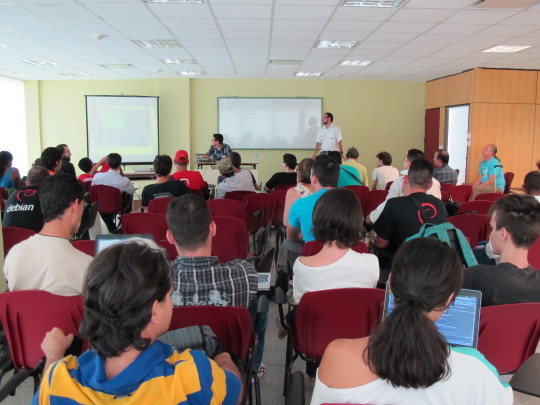 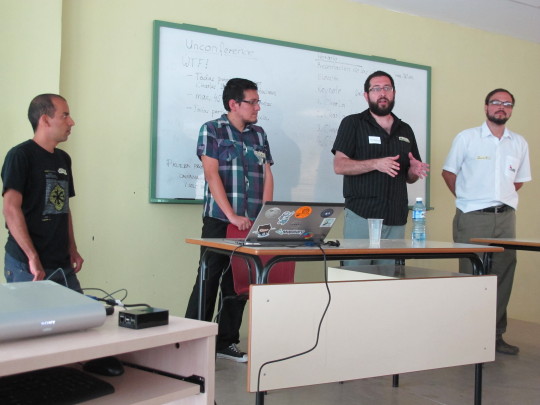 5. What steps could the global OpenStreetMap community take to help support OSM in Cuba? What would help accelerate things?

I think that helping events like Cuba Conference will definably make a difference, promoting events like this or giving talks with people well known on the field could put the things on the right track so people know what OSM is, what possibilities it could bring to our country. Of course the ideal scenario would be if national companies related to software or such support this too and at the moment there’s lack of support mainly because ignorance on how this could make a turning point.

6. In 2014 OSM celebrated its 10th birthday. Where do you think the project will be in 10 years time, both globally and in Cuba specifically?

It will be more respected than it is right now. You can see OSM now in newspapers and governments using it, so at 10 years from now would be definitely more used and spread all over the world. I think Cuba will definitely be using it not only because it’s free but because is in the Cuban nature to be independent, and OSM allows you that.

Many thanks Laura, great to read that OSM is growing in Cuba despite the connectivity issues.  I look forward to watching it continue to grow in the coming years. Best wishes to you and all the other members of the OSM Cuba community.