Normally we interview volunteers from different OSM communities around the world, but today our focus is a bit different. We had the chance to chat with Brian Prangle and Rob Nickerson about the British OpenStreetMap community’s tradition of quarterly projects, specifically the first project of this year which was to map all schools in the country. Is the idea of targeted projects an effective tool to motivate mappers? Is this a model other communities around the world can emulate?

BTW - regular blog readers may recall that we had the pleasure of interviewing Brian a few months back about Mapp Mercia. 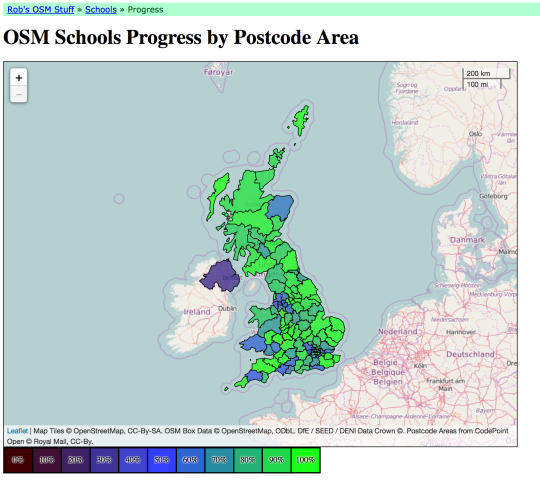 Brian: I’ve been mapping with OSM since 2007, concentrating on the West Midlands and specifically on listed buildings and public artwork. I helped organise SotM 2013 in Birmingham. Why did I start? Lost in the sands of time, I’m afraid.

Rob: I joined OpenStreetMap several years later in February, 2011. Initially focusing on mapping footpaths I attended my first Mappa Mercia meeting during the following winter. Mappa Mercia started in July 2006 initially as the Midlands User Group. The idea of the group was, and still is, to focus the efforts of local OpenStreetMap contributors under a single banner to help increase local participation. We meet every month touring the wider West Midlands during the summer and recovering in our regular Birmingham jaunt during the Winter.

2. What was the idea behind the quarterly project? Why focus on schools? How did it go?

Brian: We (i.e mappamercia) wanted to try national quarterly projects to  build more of a community where effort could be concentrated in a more co-ordinated way. We wanted something to try and recapture something of the buzz of the early days, and to show that although the map might look complete, there’s still a lot of basic stuff to do.  Quarterly because we felt weekly or monthly projects really didn’t give enough time to build any momentum; or indeed to reach out to organisations that might benefit or contribute. Three months gives folk enough time to concentrate on their personal mapping goals but at the same time devote a little extra to something they might not necessarily feel familiar with. It also gives those with some talent as developers time  to create some tools specific to the project. Schools as a subject was just plucked out of the air - we had tried four previous subject without too much traction (un-named roads, delivery (which became postboxes), visitor attractions, and nature reserves.

3. What were the main lessons learned? What worked well and what could be done better in the future?

You’ll be surprised both with how poor some of OSM’s data is (we were amazed at how poor our schools data was) and how people will self-organize and build momentum (our schools project took off like a rocket, with one initiative leading to another, mainly in the development of tools to measure progress).

Projects where there is a known dataset that you can measure for completeness seem to work well as you can see progress. It also lends to a league table competitive spirit (debatable as to whether that is a motivator or not - for some it will be, for many probably discouraging).

Here’s a screenshot of the final rankings from Harry Wood’s “School edits” tracker: 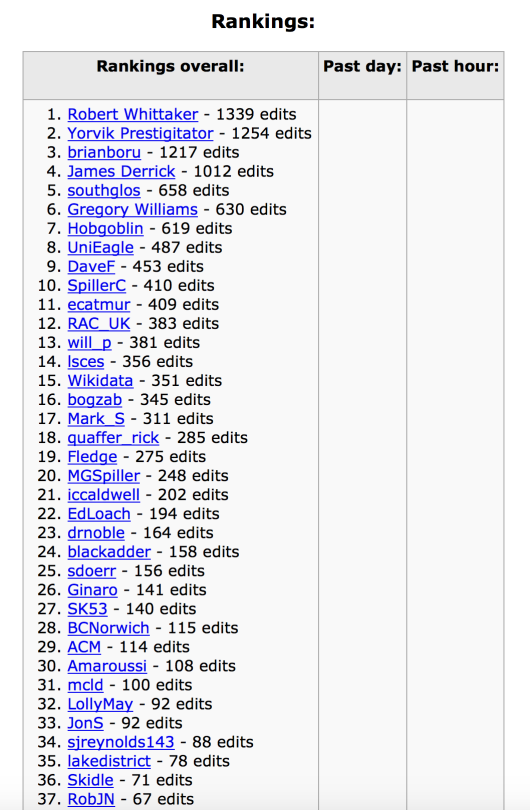 Deciding on a project subject is a combination of discussion and analysing data coverage and quality. It’s also a good idea to choose something more suitable for armchair mapping in the winter months, and encourage more outdoor surveying for the summer months.

Maybe more discussion would get more buy-in and projects getting off to a quicker start, but again might detract from completing and existing project. 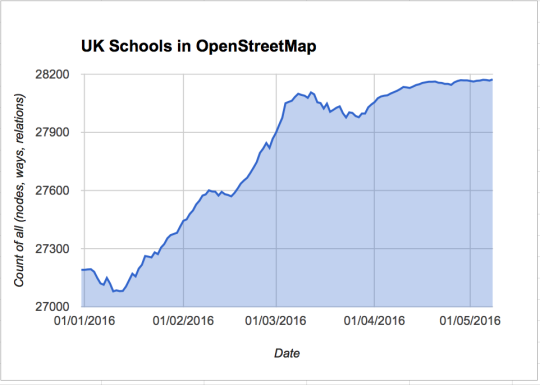 4. What types of quarterly projects do you envision for the future?

Brian: Absolutely no idea currently - open to ideas. But farms and water look like two interesting candidates. It always makes for a good discussion at pub meetings!

Rob: We’ve also discussed the idea of picking a geographical area rather than a thematic topic. OpenStreetMap is best where we have strong communities. The quarterly projects have highlighted both the well mapped areas but also those that need some attention. This can be seen, for example, in Robert Whittaker’s fantastic “OSM Schools Progress” tracker and is also a topic we discussed on the Mappa Mercia blog. Perhaps we could dedicate a winter’s quarterly project to remote mapping one of these under-represented regions.

5. Any final advice for other OSM communities around the world attempting this type of targeted effort?

I think the key thing is not to be too directive or too organised - mapping is meant to be fun! Keep it relaxed. Pick the subject and see what happens: you’ll be surprised at what folk will do unprompted. Some subjects will fall flat - don’t get disappointed. To get the most out of Quarterly Projects I guess you need lots of promotion and publicity both within and outside the OSM community of mappers.

Great stuff guys, congrats to you and all the UK volunteers. I’m sure a talk at SotM would be very well attended.