Our profile of OpenStreetMap in communities large and small around the world continues today with a look at OSM in Switzerland. We were fortunate to get a bit of time from long-time OSMer Simon Poole to tell us about OSM in the alpine nation. 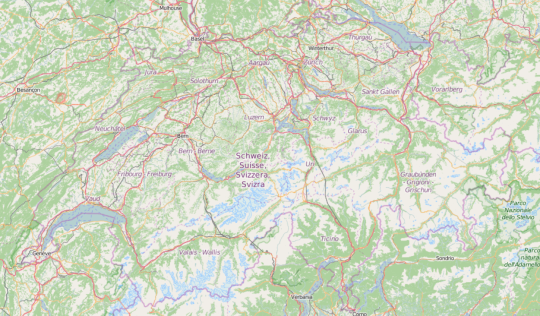 1. What would you say is the current state of OSM and the OSM community in Switzerland?

Switzerland is the smallest, both in population and area, of OSMs trio-infernal Germany-Austria-Switzerland. short DACH. Both from a community size and activity point of view there is not really a lot to complain about.

We had our big growth spurt around 2007 to 2009 and a stable increase of around 1’000 new contributors per year since then. Depending on your viewpoint the data is very good and complete, but on the other hand we are far from finished. 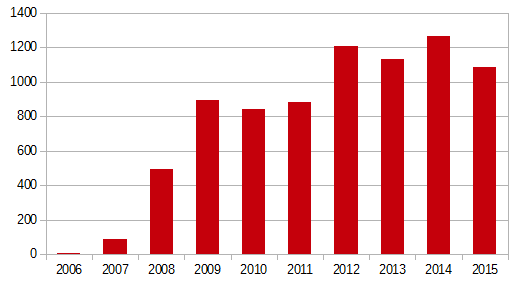 An example: I’ve been running a street name completeness analysis for the country since late 2012 when we had something like 60% of the street names in the data, the coverage has grown to around 90% now, but we are far from done. Not to mention that Switzerland has lots of new development, mainly due to the continued population growth (1-1.5% increase per annum) and just keeping up with that is a bit of a challenge. And naturally there are still lots of addresses missing, with roughly 1/3 done sourced from a mix of survey and open data.

Just as everywhere else in OSM our highly active, core community is quite small, a couple of dozen of contributors, however we probably engage more than average at an international level and are, relatively speaking, one of the louder voices in OSM-space.

2. What are the unique challenges and pleasures of OpenStreetMap in Switzerland? What aspects of the projects should the rest of the world be aware of?

The “big Canton” (aka Germany), our 10 times larger neighbour to the North, tends to be a great resource and at the same time now and then a bit of an annoyance. Unluckily some times we are thought of simply as an extension of their country, forgetting that we are a very multi-lingual state with our own culture, traffic laws, traditions and variant of German, not to mention the large number of distinct Swiss-German dialects. A recent example was applying German spelling rules to the German name of Lake Geneva.

The other point I wanted to touch on is that, not unique to Switzerland, we have lots of mainly urban areas that were mapped very early on in the history of OpenStreetMap. Zürich had essentially all its buildings mapped by 2009, pre-historic in OSM terms. That is great from eye candy point of view, but as a    consequence we don’t only have the normal maintenance issues, we have the further problem that both our data sources and the tools at the time just weren’t quite up to the standards that we have today. A lot of the arm-chair mapping time I spent in 2015 was correcting building geometry and fixing old tagging practices in the city, very time consuming compared to simply adding new stuff.

The other challenge is that most of the population is concentrated in the so-called “Mittelland” which is the flat to hilly strip between the Jura and the Alps and represents roughly 30% of the countries area. The sharp population density difference reflects itself in nearly every completeness or coverage map, it is somewhat offset by some of the affected places being strong tourist magnets, but tends to be very rather patchy. Naturally this is not really different from any country that has its population concentrated in urban areas. 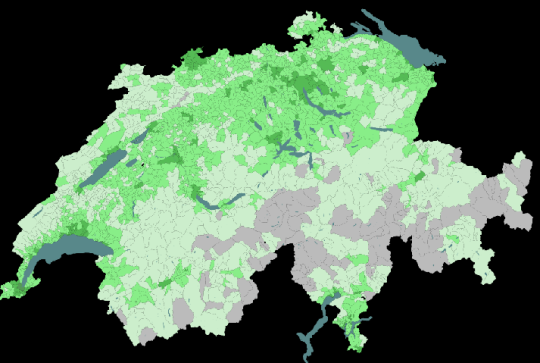 The pleasures of mapping is that there is lots of infrastructure from roads to public transport and lots of regional variation in such a small region. I’ve jokingly said that if we every run out of reasonable stuff to map we can always try to get 100% of all dog poop bag dispensers. I suspect that we are currently not even at 10%!

4. Switzerland is a country with many official languages. How does that play out in OSM and in the community?

It is not really such an issue as one might expect. On the mailing list we use whatever the poster feels comfortable with, which is some times English (in reality we have 4 official languages plus English).  Even the name tagging in the handful of places that are truly bilingual seems to be a non-issue, for example Bienne. The size of the language fractions in the OSM community don’t seem to be very different from the same in the general population. In the past this has been an issue for Italian speaking Switzerland, the Ticino, the smallest language region from a population point of view, but contributions and contributors numbers have picked up notably over the last two years.

Details that you didn’t really want to know:

Just as say the difference between British and American English, there are many sometimes small, sometime larger, differences between the German variant of German (de_DE) and the Swiss variant of German (de_CH)  with it being a bit unclear what should actually be used say for the name:de Tag (see above) when the object in question is in Switzerland, similar observations apply to our variants of French and Italian too.

German speaking Switzerland is however as you may know, not actually “German speaking”. German (as in de_CH) is essentially limited to written communication, works of art, the news on TV, school and higher education. In everyday life we use one of many regional Alemannic dialects, when used in Switzerland collectively known as Swiss-German. The :gsw suffix is used for that even though there is no way to distinguish the individual dialects and there are no formal spelling rules. By the way, regional really means regional, analysis programs can pinpoint within 10km radius where I grew up (and I’m not even a native) based on a selection of words that I use.

Here’s a map with Swiss-German, French, Italian and Romansh names.

Back to our community: the use of Swiss-German actually has a bit of an impact on communications given that both the French and Italian speaking Swiss learn German in school and are often quite fluent in it, but the German speaking Swiss at the same time are often not totally at ease with speaking “proper” German. This many times leads to conversations falling back to English at the slightest excuse.

Now I could get started on Rumansh, but everybody has likely already dropped off :-).

4. You recently tweeted that you feel the Swiss geo establishment doesn’t engage enough with OSM. Tell us a bit more.

I don’t really think that the situation is very different than elsewhere, OSM is either simply ignored or considered a slightly disruptive outsider. Where it gets really annoying is when we are not invited to participate in public consultation processes or events that touch our core competencies. In the case at hand the topic was (open) geodata regulation in Switzerland and we are clearly the largest non-government creator of open geodata and at the same time one of the largest consumers. It could further be argued that we are one of a very, very small number of projects that actually turn OGD in to something useful and of permanent value in stark contrast to the usual hack day one-offs.

A note on open data in Switzerland: nearly all open geodata we have access to is from either cantonal (our equivalent to states) or municipality sources, the number of federal open geodata is quite small.  One of the more interesting federal datasets are the cantonal and municipality administrative borders that were imported a couple of years back and have maintained in OSM since then, typically mirroring changes on the day they go in to force. There are two country wide address datasets, a commercial one from Swiss Post and the “Gebäude- und Wohnungsregister” (GWR) which includes every building and flat (georeferenced and with unique ids) however it is not even available on commercial terms (with a very narrowly defined, uninteresting, exception).  On the other hand there are a number of federal and cantonal websites that offer the same data on “open access” terms. including the address data from the GWR (yes that doesn’t really make sense does it), muddying the waters as to what is “open data”.

6. What steps could the global OpenStreetMap community take to help support OSM in Switzerland?

I would like to take that and turn it around. What can we do to help the global OpenStreetMap community?

One of the things that I believe we show nicely, is that you can have a vibrant, working OSM community, with good quality, better and more detailed than google in lots of places, data without anything more than that the project is fun and useful as primary motivators.

Great stuff Simon! Congrats to you and all the other members of the OSM Switzerland community. I agree it is fantastic to see the community continue to thrive after many years, and that Switzerland can serve as a good example to communities around the world. Also, an interesting point that some more recently mapped areas have it easier in that the tools now are so much better.(BTW congrats are also in order for Simon on becoming our first two-time interviewee, Simon was one of our very first interviewees almost two years ago.) You can learn more about the Swiss community by following @SwissOSM on twitter.