Today we have the chance to interview Christian Quest, maker of the recently launched OpenSolarMap. 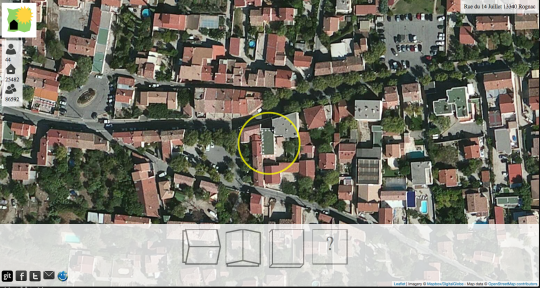 My name is Christian Quest (cquest on OSM), I’m getting close to 50 and have been computing for the past 35 years. I’ve started contributing to OSM in 2009 while I was looking for geodata to complete genealogy search. I’m a founding member of OSM France and board president for the second year. I’m working for the government at Etalab (the French agency taking care of opendata at the national level) where I’m focused mainly on our national address database.

2. What is OpenSolarMap? What was the motivation behind the project? Since launching what has the response been?

OpenSolarMap is a very simple project to collect roof orientation data to select the best roof where solar panel will give their best potential. Flat roofs allow to install solar panels with optimal orientation and best angle of inclination, and south facing roof are also good candidate to install solar panel.
I’ve had this idea for some time now, but only recently worked on it as the climate change conference is getting closer and closer.

Two events pushed me forward: an opendata contest organised by the PACA region (south of France) where the idea won one of the prizes, and the Climate Change Challenge (C3) hackathon that tool place one week ago.

The motivation is to create a dataset that currently does not exist as far as I know. Building related data does not usually contain this kind of details about roof orientation but is a really usefull information. For example, during the C3 hackathon, another team was working on green roofs and looking for flat roofs and OpenSolarMap could provide some data quite quickly in a test area.

There is no business model behind OpenSolarMap, the data collected is available as additionnal tags in OpenStreetMap building footprints. I took the same approach as a project I really love: wheelmap. It is focused on one topic, provides an easy way to contribute to OSM. I’m convinced it is a good way for new contributors to discover OSM.

The first version of OpenSolarMap started on November 7th and since then there is around 10,000 contributions per day which is much more than what I expected.

3. Are most of the users of OpenSolarMap already familiar with OpenStreetMap? Any thoughts on how to use projects like OpenSolarMap as an entry point to draw more people into OpenStreetMap, or is that explicitly not a goal of the project?

I do not have a clear idea of who has been contributing to OpenSolarMap so far. Of course the OSM community has been involved quite a lot as I posted a few mails on the French community mailing list to ask for feedback about the first prototype.

The goal is to draw more people and if possible have them discover OpenStreetMap to map much more than roof orientation. So far, the web site as really a prototype, to validate the idea and check that crowdsourcing roof orientation is viable. The design needs to be improved, have more explanations, etc.

4. Right now OpenSolarMap is focused on France. How hard would it be to expand to other regions? In general what is the best way for more people, especially developers to get involved with the project?

It’s quite easy to expand to any region where we have building footprints in OSM and good imagery. This prototype is center on the French riviera to have enough data collected in the same area to learn about the quality level of crowdsourced data thru a simple interface like the current one. There is already more than 8000 buildings with enough contributions to do some analysis.

The project (quick and dirty) code is on github.com/opensolarmap so contributing to it is really easy (and open). Just some python code for the backend and javascript for the frontend.

5. Our traditional final question: last year OSM celebrated its 10th birthday, where do you think the project will be in 10 years time?

Who can tell ? When I look back at maps only 5 years old I can’t imagine OSM in 2025 ! I imagine more and more reuse of OSM data, because it is the trend we already have in area where the data density has reached the required level for many users.

On the community side, our challenge is to keep the first step to enter the project as low as possible. It will be hard as data density increases as it makes editing more and more difficult for new contributors. Our editing tools may have to switch more to contribution tools like OpenSolarMap.

Many thanks Christian for all your work for OpenStreetMap, and congrats on the success of OpenSolarMap. I look forward to global expansion and many more such “single purpose” services for data entry into OpenStreetMap.  Anyone interested in learning more should checkout the OSM wiki and follow @OpenSolarMap on twitter.