We continue our ongoing profile of OpenStreetMap in countries and regions around the world by interviewing Mark Iliffe and Geoffrey Kateregga about the State of OSM in Tanzania. 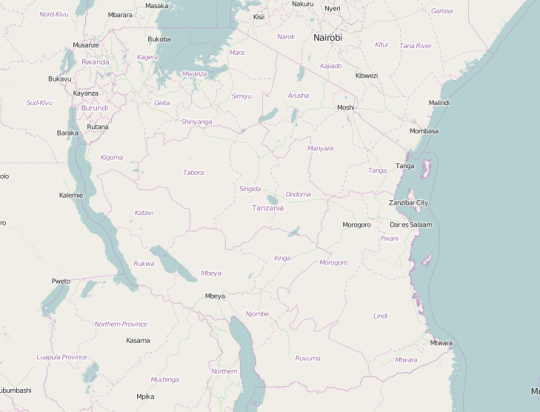 Gentlemen, thanks for speaking with us. Let’s dive in:

Mark: I’m Mark Iliffe, a Geospatial Innovation Specialist in the World Bank’s Transport and ICT Global Practice and I supervise the Ramani Huria project in mapping for flood resilience in Dar es Salaam, the largest city in Tanzania. This is a consortium of the Tanzanian Commission of Science and Technology, World Bank and the Red Cross. To do this, I lead a team of data scientists, urban planners and programmers to help support the mapping and to work with the Government of Tanzania, the City Council of Dar es Salaam and others to understand how to use OSM data to improve their ability to understand the scope of flooding and to effect change in the city with the aim of preventing future flooding. I started contributing to OSM in 2008, interned at Cloudmade, writing a routing engine for OSM data. Serendipitously, I ended up in Kenya, volunteering for a too small time on Map Kibera in Kenya then project managing the Ramani Tandale mapping project in Tanzania. Both projects utilised OSM to map slums, places where residents live on less than $1.25 without access to clean water or sanitation facilities. These two experiences for me took OSM from being a hobby that I messed around with at the weekends to something that could truly empower and enrich people’s livelihoods, by first allowing communities to map their own environment, then for those maps to be used for planning and addressal of challenges within their community.

_Geoffrey: _My name is Geoffrey Kateregga, I work as the lead mapping supervisor for the Humanitarian OpenStreetMap Team in Tanzania working on the Ramani Huria - Community Mapping for Flood Resilience project. I got involved into OpenStreetMap working on the Mapping Day project aimed at building a network of enthusiastic mappers in Uganda through organising mapping events and local OSM trainings. There is huge gap in terms of maps in Africa, it’s great to make maps where almost no data is in existence.

2. What would you say is the current state of OSM and the OSM community in Tanzania?

Mark: OSM is growing steadily, since the start of community mapping in early 2015 the size of the OpenStreetMap dataset for Tanzania (in ‘pbf’ format) has grown from 10.8 MB to 29 MB, additionally, 265 km of waterways as of August 31 ​(compared to 73 km at the start of the year), 2091 km of roads (compared to 1500 km at the start of the year), and the amount of schools has increased from 3 to 799. This has been primarily in Dar es Salaam, but through collaboration between Ramani Huria and local innovation and technology hubs such as BUNI and KINU we’ve widened the scope of mapping to cover other cities such as Dodoma, Tanga and Mwanza. In doing this, we’re aiming at building knowledge and participation in OSM to support and build a local community of contributors and developers. While this is ongoing, our core mission is to continually engage with residents and government in OSM too. These people aren’t from OSM’s traditional contributor base of tech savvy young, and they provide insights into environments and features that just aren’t collected in the developed world. 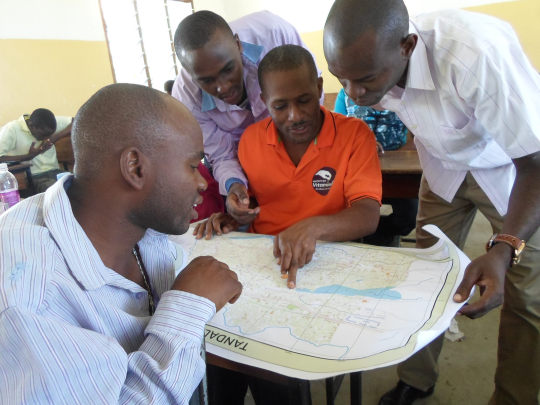 3. What are the unique challenges and pleasures of OpenStreetMap in Tanzania? What aspects of the projects  should the rest of the world be aware of?

Mark: Tanzania is changing quickly. Dar es Salaam is one of the fastest growing cities in Africa and collecting OSM data requires the pioneering of different approaches. This has meant on-the-ground mapping and actively reaching out to communities to gain different knowledge and information. This can mean working with a local community based organisation to understand where areas are flooding, to working with Missing Maps to digitise UAV imagery done by the global commons. The challenge of seeing how it’s changing so fast is its greatest pleasure of mapping in Tanzania. I remember landing on a hot and dusty Saturday in 2011, to now in 2015 the rate of growth and change in the city is astonishing and a true pleasure to see. For our project, I’d really like the rest of the world to see how OSM can truly be inclusive, and not just the preserve of the few. Our community is making steps to becoming more diverse and inclusionary and it’s important to value all that contribute, regardless of their technical skills or ability. I don’t think OSM is just about putting data on the map; it’s so much more than that and more people can contribute in their own way, I think we value each contribution equally whether it’s participation at a community forum to collecting data. 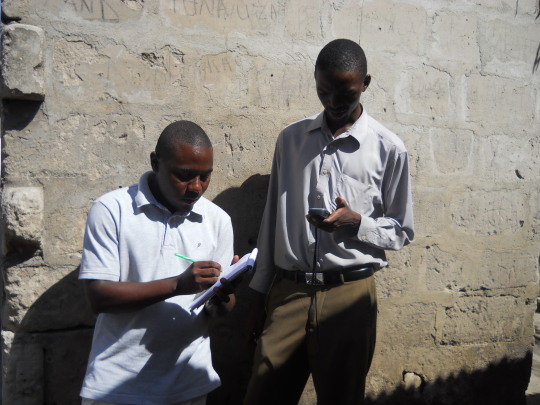 Geoffrey: Through collaboration with the Tanzanian Commission of Science and Technology (COSTECH) and the Tanzania Open Data Initiative (TODI) and collaborating with Drone Adventures, the OpenStreetMap community in Tanzania has access to aerial imagery with resolution of up to 3cm per pixel. The imagery is available on beta.openaerialmap.org, and provides the community a unique opportunity to produce highly accurate maps for Dar es Salaam. However, more needs to be done to extend coverage to the whole of Tanzania with support from government.

4. What steps could the global OpenStreetMap community take to help support OSM in Tanzania specifically and Africa generally?

Mark: I think that for our project, we’ll see new ways of collecting data, ultimately towards OSM moving to being a standard way of collecting and storing geospatial data. I think we as a community need to work out how to enable mass imports and workflows to facilitate mapping in areas that may not have a community, towards provide baseline data for the world. 10 years ago, aerial imagery wasn’t as ubiquitous as it is now, currently it requires large amounts of time to digitise this imagery. If this could have been done automatically, through auto classification, then imports, we could have utilised the same resources used for Ramani Huria to cover a much wider area. Some parts of the community in OSM, do not want this and primarily see OSM as an activity done manually. This is a completely valid judgement when considering active contributor communities in the USA, Germany and the UK and should be their right to choose their mode of engagement. In others in emerging economies such as Tanzania, the OSM community is sparse and less able to volunteer. This is compounded by the criticality and need for data, in other western countries there is an alternative to OSM, here there is no alternative, I believe this outweighs the argument of manual collection. OSM is being used for urban planning and flood resilience by officials, getting as much data as they can get will be important in allowing them the space to make their own decisions. The faster we as a community can respond to this, it will be to the betterment of OSM as a global project and help OSM deliver improvements to governments and citizens across emerging economies. The steps to do this will be hard for our community and will require us to think long and hard about our policies and license. Share-alike is something that we as a community need to discuss, I think that it inhibits us from truly making OSM a global standard repository for map data, we need to be able to work with and get as much data as possible.

Geoffrey: It would help tremendously to organize a “State of the Map Africa” to raise awareness; something on that scale has never happened before. There is a need to bring together all the mappers in different parts of Africa to share experiences and learn from each other. There has been constant growth in OSM with support from Missing Maps, MapGive and HOT which can be cemented by coming together as a community. This can be achieved with support from other communities which have organised State of the Map conferences. 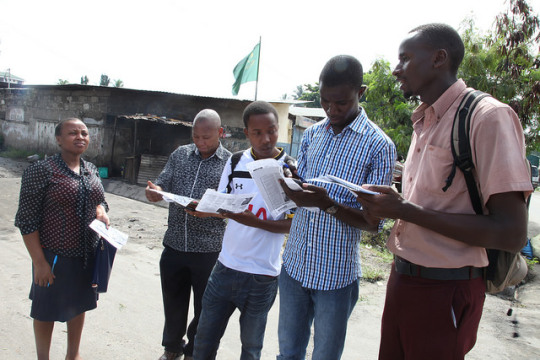 5. Last year OSM celebrated its 10th birthday, where do you think the project will be in 10 years time, both globally and in Tanzania specifically?

Geoffrey: The future of OpenStreetMap looks bright in Tanzania and Africa at large, its growth through Universities provides a good opportunity for the students to work on something practical while at the same time contributing free Geo-Spatial information. This has the potential to really make a difference through its use in government, as a basis for informing decisions and policy making. The potential for these uses is much larger than the data available from commercial vendors, precisely because of its open nature.

Mark: In 10 years, I hope that we’ll be in two places, one we are focusing on updating and maintaining a map, no longer filling in ‘gaps’ in the map covering cities and countries - everyone needs a map, that map should be OSM. Secondly, that our community will professionalise. Humanitarian OpenStreetMap Team (HOT) has shown the value that OSM has for humanitarian contexts, companies such as Mapbox, CartoDB and Scout also demonstrate the value that companies can bring to OSM, in a decade. I hope that the OSMF moves in the same manner as HOT, in having an Executive Director and staff that nurture and support the community, this model is not too dissimilar from other non-profit projects such as Wikipedia. Ultimately, that should help better define direction of the project and support the volunteer contributors, coders, community members and board members and share the good burdens of our project. The impact of this support would aid the deployment and gathering of data in Tanzania. For Tanzania specifically, I hope that a community emerges from Ramani Huria, one that is supported by the local innovation hubs, academic partners, NGOs, businesses and Tanzanian OSM community members.

Many thanks to both of you, for the interview but also for all the hard work in Tanzania. Great to learn of the impressive progress and hopefully it is the start of much more, especially around the powerful tool that aerial imagery can become for data collection. We encourage all readers to get involved.