We resume our OpenStreetMap regional profile interview series today with a chat with several people working on OpenStreetMap in Italy. 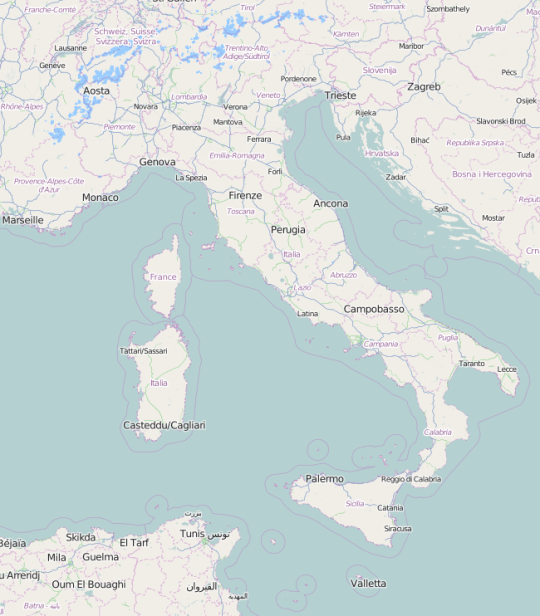 Stefano: My name is Stefano, I’m from Genoa and I’m 27 years old. I’m working in the freight transportation sector but since I was a kid my passion is geography! I first tried to edit OSM in 2009 because I wanted to cheat in Monopoly Streets (I didn’t succeed haha!) then I tried again in May 2011 because I wanted to add maps to a website I mantain which covers a small village in West Sardinia: Google Maps was really bad at the time (and today some residential roads are still wrong…), but I couldn’t fix it to show the data I was interested in. From that job to compulsive editing it was a short step. Now I also handle the social accounts (FB, Twitter, Google+) for the Italian community, where we share news about the OSM world.

Cristian: I’m Cristian, I am from Bergamo (some 50 km from Milan) but I now live in Trento, where I am doing my PhD in Computer Science at the local University. I am a Wikipedian (since 2007) but I discovered OpenStreetMap only later in 2012. I registered an account but I didn’t do much until the beginning of 2013 I started working with Maurizio “Napo” Napolitano at Fondazione Bruno Kessler as a contractor. Since then I have contributed mostly with scripts and tools for the community.

Simone: I’m Simone. I’ve been involved with OpenStreetMap since the very beginning of it, since before there was a map on the website, it was 2004, mapping was hard, no satellite imagery, no good and cheap GPS devices, but we did it, and we succeded. Later I became secretary elected of the OpenStreetMap Foundation, now I’m appointed vice-president of WikiMedia Italia, which is acting as (and doing the paperwork to become) the italian Chapter of OSMF. I currently work mainly with opendata and specifically with OpenStreetMap data as Product Owner taking care of some products in development at SpazioDati. I like to map parking lots, using JOSM on Ubuntu.

Maurizio: I’m Maurizio (napo for the friends). I’m an activist on OpenStreetMap since 2008.  In 2009 i was involved in the organization of OSMIT  - the first italian OSMers meeting in FBK - Fondazione Bruno Kessler. Actually I’m the coordinator of the unit Digital Commons Lab in FBK. Our aim is of studying, supporting, popularizing, and innovating the world of digital commons (open source, open data, openstreetmap, wikipedia, and so on). I´m also ambassador for Open Knowledge in Italy and I work also with the government on the topic of Open Data by using always OpenStreetMap as best practice.

2. What would you say is the current state of OSM and the OSM community in Italy?

OSM in Italy has a similar pattern of evolution with respect to the world: some areas are well mapped, some others not much. For example: Northern Italy is well mapped because more people have joined the project and more data is freely available to be used there. The rest of the country is coming along nicely.
The recent enthusiasm about Open Data in Italy has increased the attention of OpenStreetMap. Some years ago speaking about OpenStreetMap always generated a surprised reaction, now the project is quite known.

Nowadays in Italy some websites are using maps from OSM, you can sometimes read articles in newspapers or see it in the news on TV. Some public administrations are starting to embracing OpenStreetMap, from using OSM on their websites to more complex projects, e.g. the region of Piedmont organized in 2014 a contest called “Mapathon” to encourage the diffusion of OpenStreetMap and the reuse of its data for novel applications. In other cases some public institutions are using OpenStreetMap as their official data source.

The project is becoming more and more popular in Italy but, on the other hand, the Italian community is not homogeneous: there are several cases in which users collaborate on a regional level using the local mailing list, while other users are more isolated.

3. What are the unique challenges and pleasures of OpenStreetMap in Italy? What aspects of the projects should the rest of the world be aware of?

The major challenge is having core datasets released by the (Public) Administration! There are several issues: the national statistics institute (ISTAT) has collected census data and addresses without coordinates, we have non-free postcodes and so on.

Notwithstanding this, the OSM community is more and more recognized: OSM data are used by local projects, other communities (like cycling enthusiasts) and the government itself reuse OSM as well (last year we found that the Cadastral Authority was using “our” buildings without attribution!). The fact that Public Administrations open their data is an important step in increasing the awarenes of the public, but it only through use and re-use of data that the level of trust in OpenStreetMap will increase. Currently, there are still some people that criticize OpenStreetMap or oppose its use claiming that OpenStreetMap data are not accurate or reliable, however they usually have high trust in proprietary products that have been shown to also contain errors.

4. What steps could the global OpenStreetMap community take to help support OSM in Italy specifically?

The global community of OpenStreetMap is already doing a great job. In Italy we often report successful projects that take place outside the border, both on the mailing list and on the social networks.

Probably one possibility is starting collaborations and projects with the nations bordering Italy, or improving more focused projects like OpenSeaMap, were there is still the need to make major contributions. Unfortunately international collaborations have to deal with the barrier of language diversity.

Finally, we also believe that in Italy the field of cultural heritage offers a great space to attract tourism, businesses and projects where maps are fundamental.

5. Last year OSM celebrated its 10th birthday. Where do you think the project will be in 10 years time, both globally and in Italy specifically?

We hope that OpenStreetMap will be a truly global and coherent dataset powering all major geo-applications and empowering people to reach their targets in a collaborative way. We think that in the future, more governments (starting from Italy perhaps?) will realize that OpenStreetMap is a common good and, as such, they will strengthen their dialogue with our community.

Many thanks to all of you for your efforts to promote OpenStreetMap. Stay informed on OSM in Italia by following their twitter account.