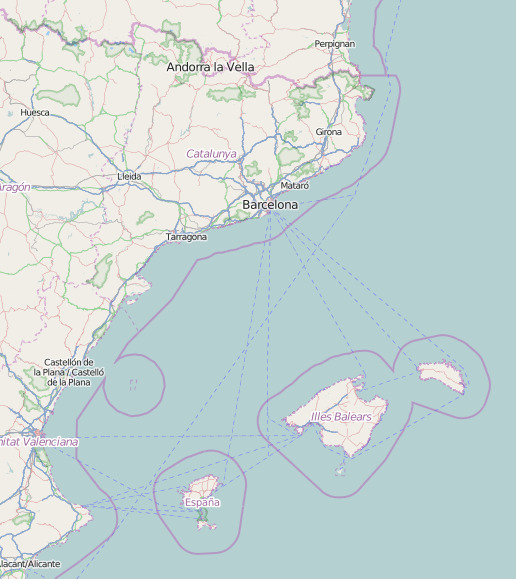 We are the OpenStreetMap’s Catalan speakers community. We found a common goal that mixed geospatial information and the promotion of the Catalan language. OSM is the answer to our goal. It provides a open data base which allows us to add local information and in Catalan, freely.

The effort of Google to translate into Spanish all the Catalan streets and ways that are officially and in the reality written in Catalan, resulted in a huge mess and a sum of protests that continues nowadays when somebody tries to find a street or a square. This fact helped to promote and be seen as an open alternative, OpenStreetMap.

2. What would you say is the current state of OSM and the OSM community in Catalunya?

Nowadays, the ways have a good quality thanks to a hard work made in the past. There’s a good work involving the paths and mountain hiking routes. The map is currently growing and with a high level of detail in some areas. But there’s a lot of work to do in the urban areas.

We had the pleasure to be part of the SotM 2010 which took place in Girona. Last year, we organized our first meeting as a OSM community in Sarrià de Ter. Since this first meeting, we started to build and shape our community. We organized several workshops and conferences like “OpenStreetMap for the Forest Defence Association”. A workshop which focused on tagging forest elements, like tracks and fire hydrants and the use of mobile applications.

We have a long path to increase our mappers and improve communication between us.

3. What are the unique challenges and pleasures of OpenStreetMap in Catalunya? What aspects of the projects should the rest of the world be aware of?

We focused our work in some specific areas like Montuïc’s cemetery, the Barcelona’s Zoo or Port Aventura. We are working with Wikipedia community to link OSM data with Wikidata and viceversa. We finished in 2 weeks of work without rest the addition of the wikidata tag to all the cities, towns, provinces and regions of Catalunya.

We also started to recover the Catalan names in Perpinyà (Northern Catalonia, southern France). There is also work to do to tag Occitan names in Val d’Aran. We are glad to count with apps like OsmAnd that allows the use of the catalan language but we miss yet a TTS in Catalan.

Some mappers of our OSM community started to focus on 3D tagging and urban elements as bus routes, fire hydrants or opening hours. The knowledge and the focus on the local area lets us to improve the data and present OSM as a reliable source data.

One of our goals is to involve governments and teach them the benefits of open data. We are currently importing information from the Cadastro in some areas like Girona, a work started and coordinated by the Spanish OSM community. A task that would be easier with the implication of the Spanish government. We also hope that the information from the ICGC (Catalonia’s Cartographic and Geological Institute) will be added into OSM in the future thanks to a new transparency law.

4. What steps could the global OpenStreetMap community take to help support OSM in the Catalunya specifically?

OSM helped us by letting create a non-state community. Maybe, we expect to increase the strength of the communication and feedback with the rest of the OSM communities.

5. Last year OSM celebrated its 10th birthday, where do you think the project will be in 10 years time, both globally and Catalunya?

In 10 years, the detail of information will be awesome. Thanks to a increase of mappers and interest in open data. It will experiment a process similar as Wikipedia. It will become, hopefully, in an essential resource that with better information will compete with commercial alternatives.

We hope more governments and administrations will discontinue the use of commercial maps and payment data and support open data. Some of our city councils start to join OSM by using their maps or by open their data bases to OSM mappers. A fact that will continue growing because open data is also a way to optimize and save money and resources and to promotes the creation of companies linked to the use of open data.

Many thanks Carlos and all the rest of the Catalan mappers for all of your efforts. Having just moved to Barcelona myself I can confirm the city has been impressively mapped. To learn more please follow OSM en català on twitter.