Earlier this week we profiled Mapazonia, today we return to the northern hemisphere with a look at the state of OpenStreetMap in Latvia. 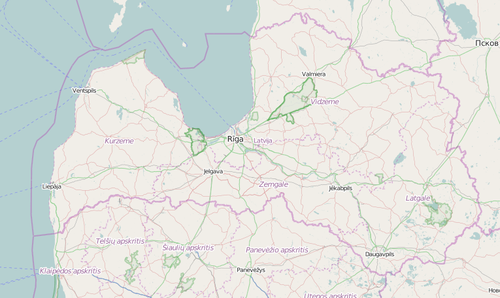 OpenStreetMap in Latvia is a project with many active collaborators. Most of them are very busy at their work and personal life, thus only a couple responded to the request to answer these questions. Nevertheless, it is important to remember that the efforts of many individuals have shaped the map of Latvia.

Today we have two participants answering the questions : Ilja and Richlv

I: Hi! My name is Ilya, I’m from small city of Latvia, named Dobele, and mainly I’m working as a software developer. I’m get to known about OSM project from an article in Wikipedia. You know, there is section in the main page, named “Did you know…”, and one day I saw that there was some sentences about OSM. I was interested in geography, and especially in maps, since I was in school, so, I’m started to searching some more specific information about OSM project, and finally, decided to try some edits in my hometown.

R: I go by nickname Richlv, and I primarily work on an open source monitoring solution called Zabbix. I have always been interested in maps, in a way to find my way. We have a prominent mapping company in Latvia, but their products are proprietary, their data even more so. Their map application did not even work on Linux. I was constantly looking for some more open solution that I could also use on mobile devices without internet connectivity. I had heard about OpenStreetMap some time around 2005, but I had no GPS device back then, thus it was not that easy for me to participate. Obtaining a GPS a few years later got me addicted to spotting and recording details of my surroundings.

2. What would you say is the current state of OSM and the OSM community in Latvia?

I: A: Comparing to the previous years, OSM is still growing, and not only as a cartographic data array. Nowadays, OSM became used as a tool in a number of social and humanitarian projects. Of course, there is still a lot of work, but I cannot deny the fact, that OSM project finally took a place in our life, and now, it can make it better. I’m recently joined to the Latvian OSM community, so I can’t say much. By my personal feelings, Latvian OSM community is friendly and helpful, but, possible, it needs more active members.

R: OSM in Latvia currently is in a state where it can be safely used for basic navigation. In the capital, Riga, most of the shops and other amenities are mapped as well.

Of course, there would be no such map without a great community. Even though there have been some imports, majority of data in Latvia has been collected and entered by the community members. The amount of time participants can devote to the project changes, but overall we are gaining new members in various regions of Latvia. It is really great to see mapping activities happening in smaller towns.

As for the community, our first mapping party happened back in 2010 in
town Cēsis, and it was a really great and productive event.

Some of the participants: 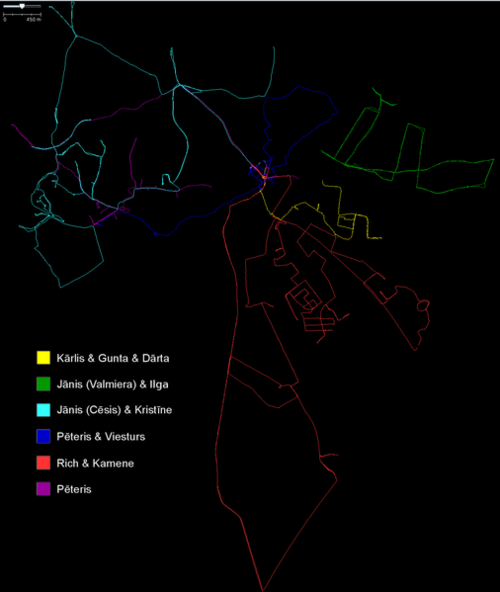 We have also had great events in town Līgatne, where local council helped with the organisation of the events.

Introduction to OSM in Līgatne: 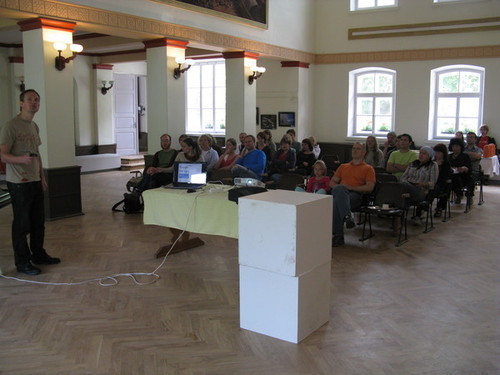 Our most recent event happened in the city of Jelgava, also greatly helped by the city council. During this event, among other things, participants collected and mapped almost 500 house numbers. Here are some photos: 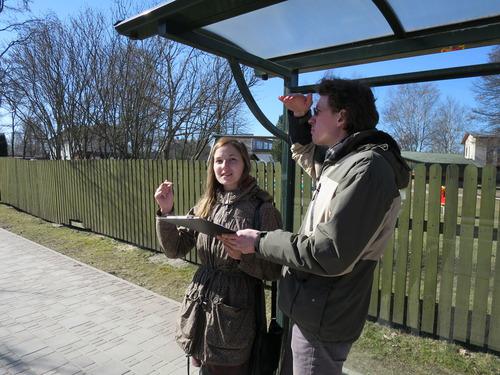 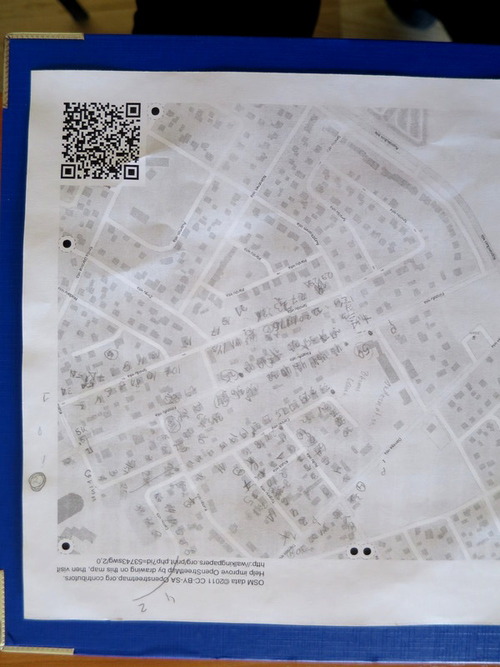 3. What are the unique challenges and pleasures of OpenStreetMap in Latvia? What aspects of the projects in Latvia should the rest of the world be aware of?

I: By my opinion, the main challenges of OpenStreetMap in Latvia generally is the same as in the rest of the world. Two main goals, I’m thinking about is to make more close interaction with local governments, as also as to make OpenStreetMap project more popularized between the young generation, which, actually is also more active and more advanced in modern technologies, than older people.

R: Comparing globally, OSM in Latvia is probably not very unique. We have fairly active contributors but little data sharing with state and local authorities - many cities and state agencies still hold on to the “old ways” of treating data, obtained with public finding, as private. The situation is starting to improve, though. Notably, several cities have started working towards opening their geographic data. Latvia is somewhat unique in having large part of the population live in the capital city. Countryside towns tend to have older population that is less technically involved, thus there is smaller pool of potential contributors. Still, lately there are more and more contributors from smaller towns, improving their own turf.

Cooperating with country-level authorities has been challenging, but more and more city councils are working with OpenStreetMap - especially smaller ones that can not afford a full cartographic department turn to OSM for some of the data and tools.

4. What steps could the global OpenStreetMap community take to help support OSM in Latvia?

I: As a OpenStreetMap newbie, I met the fact, that there is a lack of translated articles in official documentation, as also, some articles is just hard to understand. Possible, some rework on OSM documentation may improve the situation and make the whole project more popular between the map enthusiasts.

Thankfully, situation is still improving, and there is enough materials and tutorials, created by OSM volunteers too.

R: The more widely the dataset is used, the more interested various parties are in getting their data in that dataset - for example, fuel station companies would want their stations to show up in maps that are widely used. Although generic mobile applications that use OSM data are appearing, it would be great to have something that would provide traffic congestion, speed trap and other information, as these would motivate more people to use the application and the map. Additionally, OSM project would be able to collect much more GPS traces. Of course, this direction is not specific to Latvia, it could help to increase uptake in OSM usage worldwide.

It has been argued a lot about what is the role of OSM foundation and whether it should get involved in providing applications. I have come to believe that it should do a bit more in that direction, especially when there have been so few attempts at such an application for OSM. Regarding other tools and datasets, it will be interesting to see how Mapillary (crowd-sourced streetview data company) develops. Hopefully, they will stay as open and friendly to OSM as they have been so far, if not more so.

5. OSM recently celebrated its 10th birthday, where do you think the project will be in 10 years time, both globally and in Latvia specifically?

I: Looking back, to previous years, you can find, that OSM was rapidly growing, especially in last 5 years. There was new side projects and new applications, that use OSM data, and growing community, which helps to collect data and modify existing places. Thinking about next 10 years, I may presume, that general mapping job will be mainly done.

Of course, it wouldn’t mean, that number of data will stop growing, otherwise, I think, there will be additional new tags, details, as also, as number of new applications and services based on OSM data, so OSM project will be more and more widely used in our life.

R: In 10 years OSM has grown to be the most important open geographic dataset in the world. Historically, it has been strong in Europe, with other regions trailing, but lately USA seems to be catching up (not sure about other countries in Americas). The more companies and communities are interested and involved, the better tools will be available both or contributing to the dataset and using it. This in turn will make OSM (data, rendering, applications…) more suitable to bigger amount of users to draw contributors from. I would expect that in 10 years we will see more companies interested in providing high quality data on their business - shops, hotels, fuel stations, other places. In Latvia, I would probably give 5-6 years until we have full coverage of every street in every town, with shops and other points of interest following closely. Additionally, closer cooperation with city councils is starting to happen already - this will improve and hopefully we will start to have channels of communication where at least some of the authorities would even inform OSM project about changes like new streets, house numbers and other data that is in their possession.

Many thanks for the detailed update guys, and congrats on your progress. Anyone who wants to join in should check out osm.lv.