We chatted with Søren Johannessen about what’s happening in OpenStreetMap in Denmark. 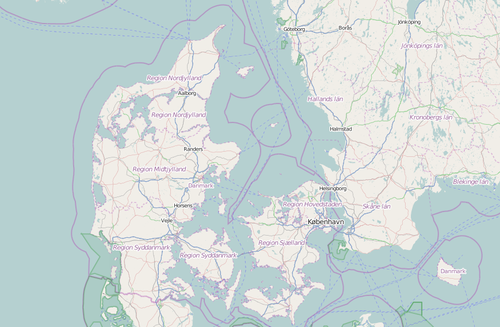 My name is Søren Johannessen and I work as a technical freelancer and teaching in several IT related areas. My way to OSM came in may 2010 when a very active person in OSM Denmark invited me to the OSM DK-Talk mailing list and all stuff in the OSM universe. Its has now been 4 ½ very interesting years during which I have been involved in teaching at serval mapping parties and writing some danish techincal guides to OSM. For example “How to use a TMS layer in JOSM,iD or Potlach2” or “How to use Overpass Turbo”.

I have also been involved in OSM Denmark meetings with Wikipedia Denmark and I have been giving speaks about OSM for people at The Danish Geodata Agency and Ministry of Housing, Urban and Rural Affairs.

I have also been involved in translation into Danish for following OSM related projects like iD, HOT Task Manager, Overpass Turbo, uMap and Wheelmap app. For the Danish Cyclists’ Federation I have in 2011 been on an OSM teaching roadshow in 5 towns in Denmark, where 100 members learned how to map bicycle related objects. I am also running a Danish blog Microformats.dk writing about OSM issues and other related mapping subjects. Outside Denmark I have helped the Map Lesotho project with weekly stats since the start back in June 2014.

2. What would you say is the current state of OSM and the OSM community in Denmark?

The things are in pretty good shape when it comes to the road network (for cars) - We are at moment on a 99.9 % finish rate for named roads and the grand total for road network is about 165,000 km (incl. paths, footways). The numbers of monthly editors is about 100 editors and I think about 20 editors doing 98% of all edits.

The darkside of OSM Denmark is the classic OSM problem with mainly editors from urban areas and not so many from rural parts of Denmark. This creates some problems with missing paths in forests, where you can’t use Bing or other layers to trace from. However Denmark is not so big (43.043 km2), so it is possible to go on a bike weekend and do some GPX tracing in rural areas. I know some Danish OSM people have done this. However it would be nice to have local editors in every single parts of Denmark and this would also gives a lot of more local POIs knowledge ( ex shops, libraries, cafes, artwork) which are missing in rural parts of Denmark.

A little off-topic to mention here. Every year July-September in West Jutland, we can see some amount of tourist mapping from Germans on summer holiday in Denmark.

Photo of a Danish Mapping Party 2013: 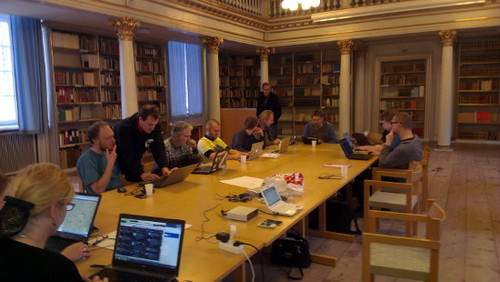 3. What are the unique challenges and pleasures of OpenStreetMap in Denmark? What aspects of the projects in Denmark should the rest of the world be aware of?

Denmark has about 10,000 km bicycle ways and a 7,300 km coastline, which are some of the major objects you see when mapping/tracing in Denmark. Denmark is famous for its bicycle culture and a lot of municipalities are these year investing a lot of money in building a better bicycle infra-structure. Research shows that every 100 km you go on a bicycle benefits the society with 3.5 Euro. Other research shows that people on bicycle holidays spending 2 times more money per day than people on a caravan holiday. So the tourist industry is also very interested in this and invest a lot of money in marketing. Some Danish local tourist offices have been interested in OSM as way to get maps or adding POIs (hotel, motel, cafe, camping etc). 10 municipalities in the Copenhagen area have used OSM data for bicycle routing and a map. So mapping bicycling related objects are in my point of view an important task. Of course OSM Denmark has lots of work to be done before, this is a reality.

4. In terms of OSM, Denmark is probably one of the best mapped countries in the world. What challenges and opportunities does that create for the local community?

I have to confess OSM Denmark have been very lucky during the last 6 years. Let me say a few words about this luck - for 12 years the official 2.3 million addresses in Denmark have been open and free. In 2009 they were all imported into OSM and several OSM people have since regularly been updating the 50.000 address nodes that change yearly.

In November 2010 the Bing layer went public for OSM tracing, however it only covered 30% of Denmark. A major game changer came in January 2011 when the company Fugro gave OSM Denmark access to their 40cm aerial imagery which covered 100% of Denmark. This permission and access to Fugro gave a boost in OSM Denmark from a finish rated of named road in January 2011 at 68% to 99.9% in October 2011. The names of the roads came from the addresses mentions above and the line geometry of the roads came from tracing of Fugro aerial imagery. 2011 was a good year for OSM Denmark.

In summer 2012 Bing layer did a major update and now it covers 100% of Denmark. In spring 2013, as a part of the Danish government open data project, The Danish Geodata Agency released a 10 cm aerial imagery. At 10 cm you begin to see objects like the painted carpark signs for the handicapped on ground and benches. The Ministry of Housing, Urban and Rural Affairs have this year released a “New road name” tool - Here can you find each month about 40 newly official road names and where in Denmark they are, so it is just going into your OSM editor and added it.

An ongoing project at the moment is missing hamlets and villages, The Danish Geodata Agency had released an open dataset with all 7800 hamlets, villages & towns in Denmark and they have also incl. the population numbers for each place. We’re missing about 1800 minor hamlets and villages, before we had a 100% placename coverage. In the pipeline we have a 3.8 million buildings import, which are also an open dataset from The Danish Geodata Agency. Every buildings in Denmark over 9 m2 is registered in this dataset. A test sample of the building quality
can be viewed here.

But again without editors and someone doing the hard work with edits or imports the value of having access to open data is zero. The true heroes of OSM is the local editors which makes things comes true. 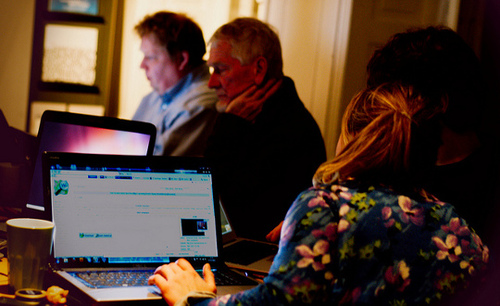 5. What steps could the global OpenStreetMap community take to help support OSM in Denmark?

It’s great that the large OSM communities like USA, UK, Germany & France have lots of technical people, who create great software tools which helps/benefits us all incl. us from the minor OSM communities. If the software tool is great, you quickly see 15-20 language translations of it. I think minor OSM communities should have a outlook about what is going on world wide. My own primary sources to see what is going on is the OSM Germany weekly “Wochennotiz” newsletter or Twitter hashtag #openstreetmap. And we could learn a lot from each other - My best example is Berlin Zoo (I think they started in 2009) where the Germans mapping where the animals live in the zoo - Now every OSM community is doing this - so good ideas walk around in the OSM world and get copied. Finally we should not forget to sending a huge thanks to the database team which doing at great work to have the system up and running. I also know serval Danes incl. me are happy for the daily Denmark data extract from Geofabrik.

6. OSM recently celebrated its 10th birthday, where do you think the project will be in 10 years time, both globally and in Denmark specifically?

The grand vision is that every citizen on earth can point out on a OSM map where they live - So it would possible to see all placenames of hamlets, villages, and towns, and of course the roads which leads there too. To get to this global goal mention above, I hope see more Danes will join some of the HOT mapping projects. I hope for Denmark, we will get more local editors in rural areas. With more editors I also think the first State of Map Denmark conference could take place. Regarding mapping I hope we will see a nearly 100% (well maps never finish) road network (incl. paths) which contains data about surface, tlit,speed limit.

Time will tell - thanks to OpenCage Data for starting this series with interviews from small OSM communities, good to get some insight what is going on.

Many thanks Søren. It’s our pleasure to expose the great work going on in OSM everywhere in the world. It seem’s the Danish government’s approach to open data is one that other countries can look at with envy (and hopefully copy). Also you make an interesting point about the connection between cycling and OSM, hopefully more tools can be built to engage the cycling community. Congrats to you and all the OSM Denmark volunteers on your progress. Keep up the good work!